DONALD TRUMP - SEX CRAZED PARTIES - THE ART OF THE DEAL 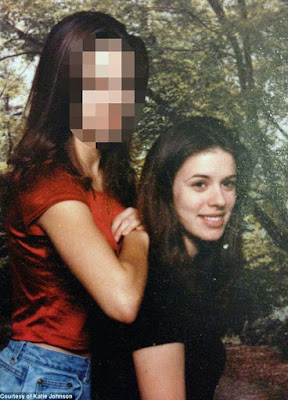 Katie Johnson, who says she was raped by Trump in 1994.

Katie Johnson has dropped her lawsuit against Donald Trump.

Katie still maintains that Trump raped her, when she was aged 13.

Katie says: 'I mean it affects my relationships, I don't think I've ever had a successful relationship, one that I feel I can trust that person, there's always that mistrust.'

She says that the rape led to her taking illegal drugs.

Many of the victims of the North Wales child abuse ring died in mysterious circumstances.

Anglesea has at last been jailed for 12 years for the child abuse he committed. 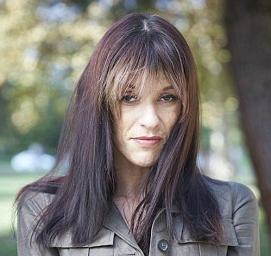 Katie Johnson says Trump took her virginity, and that Trump and Jeffrey Epstein treated her as a 'sex slave' during a 'horrific' summer in 1994.

Epstein is a convicted child abuser, and a close friend of both Donald Trump and Bill Clinton.

Katie Johnson says that there have been threats of 'violence' to her and her family. 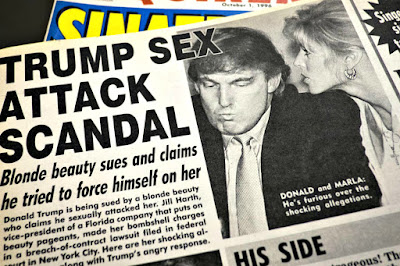 Katie and her mother then moved from Oklahoma to Washington state.

Katie's mother then met a man who went in for physical abuse.

Katie then returned to her father in Oklahoma.

Her father had a new woman and life was not easy. 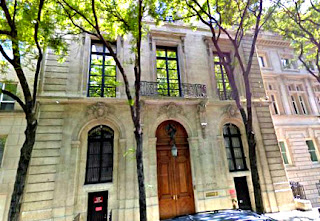 At a bus terminal in New York she met Tiffany.

Katie says of Tiffany: 'She was nice and told me about the parties and said that, if I would join her at the parties, I would be introduced to people who could get me into modeling.

"She said she helped girls like me get to where they want to get. She also said I'd be paid.'

Katie says she met Trump at parties held by Jeffrey Epstein at his 71st Street townhouse in New York.

Katie says that the house was 'filled with expensive things' and she felt out of place.

Katie says of Trump: "He didn't really talk to me at all, he spoke at me, but he was talking to Tiffany more telling her what he wanted me to do. I thought he felt like he was too good to even speak to me.

"Tiffany told me what I needed to do. Anything he did say to me wasn't that great, like 'you need some work'.

Katie says that Tiffany explained how to sexually stimulate Trump.

Katie says: "And I did not know what she meant at first.

"I had only kissed a boy at that point, I didn't know what to do.

"She (Tiffany) wanted to give me a crash course, the whole time I'm not wanting to do it."

Katie says Trump said very little to her during that first encounter other than she reminded him of his daughter.

Katie says that after she finished the sex act, Trump made a comment that she 'wasn't great', before putting on his pants.

Katie says that before she left the party Epstein gave her $700.

Katie then returned home to Oklahoma.

During the journey home she broke down in tears.

Tiffany told Katie she was sending her a plane ticket back to New York, and promised to set up a meeting with a director of a modeling agency.

Tiffany told Katie to keep these things secret from her friends and family and said Katie might get hurt if she let the secret out because she was dealing with 'powerful people'. 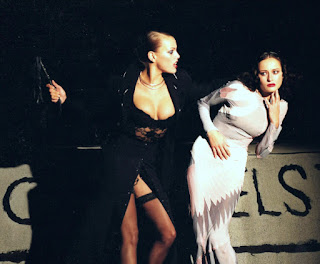 Katie says: "Within a couple of weeks I was heading back to New York...

"I stayed at Tiffany's apartment.

"I remember she had a driver who would take us places.

'When I went back there was a party that night.

"Tiffany was basically ready when she drove up to the airport to pick me up, my plane had been delayed.

"I asked her if we could go to her house but basically I changed in the back.

"When I got to the mansion it was basically the same thing, kind of meet people, entertain people, walk around.

"If someone requests something of you then... 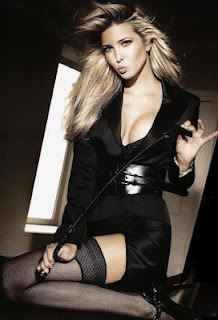 "Again Tiffany said I got requested and it was the same guy as before, it was Trump. And I was to give him oral sex.

"I had never done that to anybody so I was a little nervous, so I walked up to him and moved in that direction and he kind of slapped me away and said, 'what are you doing, you need to put a condom on"'.

Tiffany gave Katie a condom and apologized profusely to the man she claims was Trump.

"He made a comment that I wasn't doing it right, that I needed to take classes.

"He continued to let me do it, he didn't tell me to stop.

"He said something to Tiffany a couple of time, 'tell her to go faster'.

"Tiffany was close by, then after a little while, I guess he was done with it and he went." 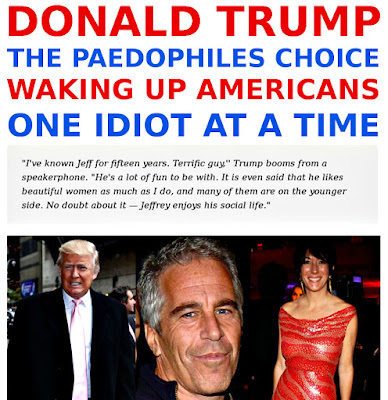 In New York, Tiffany called Katie and said, "You've been requested for a fantasy role play".

It was a private event, with another girl.

Katie says: "I got to New York and was taken to Jeffrey Epstein's house.

"I was taken to a room and it was me and another girl were cleaning and we would have an encounter and he (Trump) would come in.'

Katie describes a role play in which she and another underage girl were dressed as maids and they were forced to 'make out' with each other.

Katie says: "I'm freaking out, I'm like, so you want to tie me to a bed and play out a rape scene with a man.

Katie says 'Trump' ordered the two girls to carry out a string of sex acts on each other and on him. 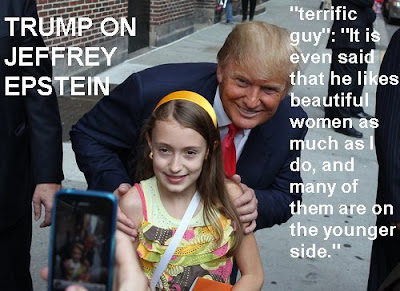 On Katie's final trip to New York, there was another encounter.

Katie got Tiffany to stay in the room.

Katie says of 'Trump': "He was pretty rough with me, I was already tied to the bed.

"I didn't really know it was gonna be that, he pushed me around and tore off my clothes."

"It was like he was going for one thing, it was basically to have intercourse and I started crying and I asked him to stop and I asked Tiffany to come over, but he kept on."

Katie says Tiffany tried to intervene, but she was pushed away.

Katie says: "He slapped me and told me to shut up and then he ripped my panties off.

Katie says: "Trump basically said that I should be proud that he would even allow me the opportunity and if I got pregnant I could get an abortion.'

Katie says: "Jeffrey Epstein came in and he saw that there was money on the floor and got mad, he asked if I had asked for the money and said that he was gonna be the one to pay me and said it wasn't mine to take." 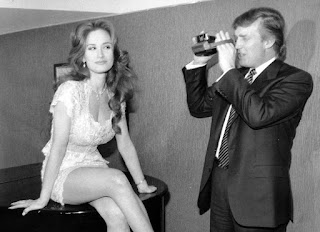 The parties were held at one of his Manhattan hotels.

"Trump was in and out. He'd wander off with a couple girls.

"I saw him. He was getting laid like crazy. Trump was at the heart of it. He loved the attention and in private, he was a total f....g beast." 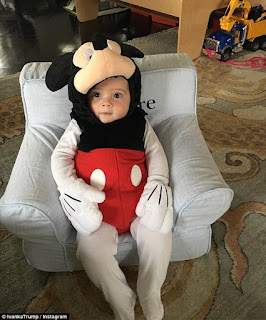 "I put lipstick on a pig," says Schwartz. 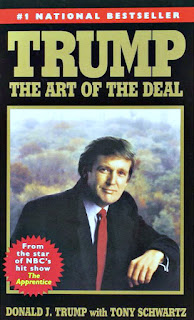 In a newspaper article Schwartz has portrayed Trump not as a brilliant mogul but as a ham-fisted thug.

"It isn't because of Trump's ideology - Schwartz doubts that he has one.

"The problem is Trump's personality, which Schwartz considers pathologically impulsive and self-centered." 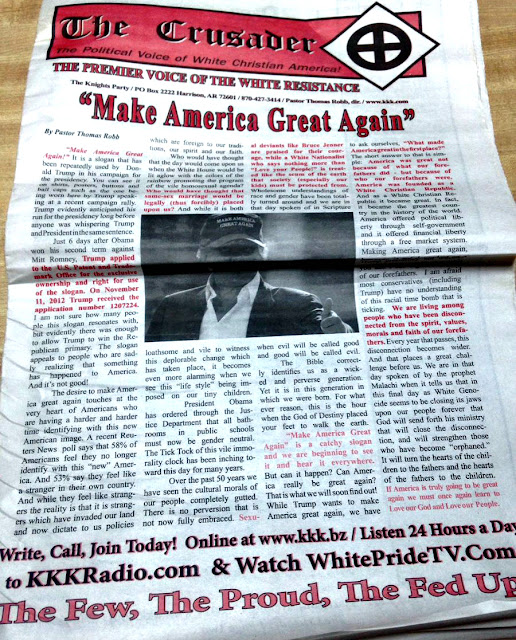 Schwartz believes that Trump's short attention span has left him with 'a stunning level of superficial knowledge and plain ignorance.'

Schwartz says, "That's why he so prefers TV as his first news source - information comes in easily digestible sound bites.

"I seriously doubt that Trump has ever read a book straight through in his adult life." 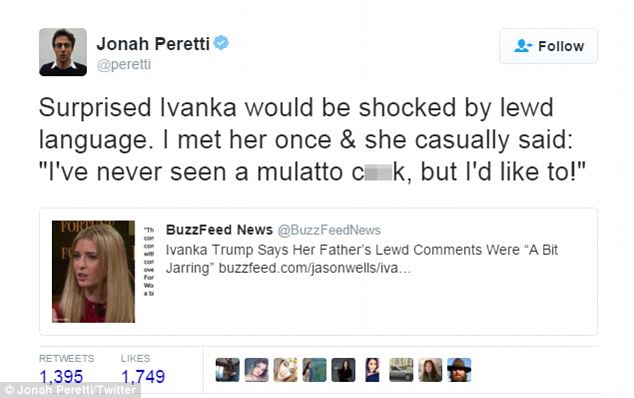 Donald trump did give his blessing when Ivanka was 15 and signed on as a model with Elite. 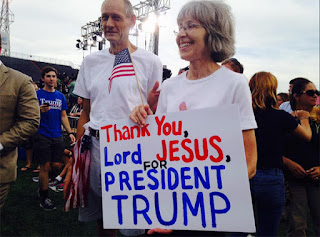 Donald Trump is the most popular candidate with Evangelical Christians.

Yes, Donald Trump is the most popular candidate with Evangelical Christians.

American Dream Calendar Girls was run by George Houraney and his girlfriend Jill Harth, with the assistance of Donald Trump.

A pin-up model named Rhonda Noggle remembers joining Trump in his limousine with a group of scantily-clad girls as they left the Plaza Hotel's Oak Room.

Jill Harth alleged that she was repeatedly groped by Trump, during that night at the Oak Room. 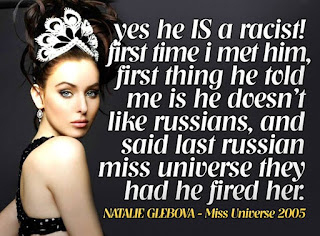 Harth said that Trump made numerous unwanted sexual advances toward her throughout their business relationship.

Harth said that, at Mar-a-Lago, Trump brought her to an empty bedroom at the estate and restrained her from leaving.

Another girl with the group, 22-year-old Lauren Petrella, claimed that Trump had crawled in bed with her that night.

What we do know is that Trump is in Jeffrey Epstein's little black book.