CHILD MURDER IN THE NETHERLANDS

In 2015, in the Netherlands, a former child sexual abuse victim, a girl in her twenties, was given a lethal injection by her doctors.

The doctors stated that her post-traumatic stress and other conditions were incurable.

In 2014, there had been improvements in the girl's psychological condition after 'intensive therapy'.

The girl, who has not been named, was abused between the ages of five and 15.

One British Labour Member of Parliament says it means that sex abuse victims are now being punished with death.

The child abuse networks are linked to the trade in heroin and to various security services. 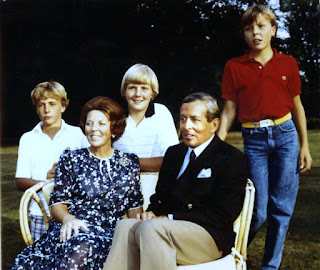 In April 2016, a court in Amsterdam was hearing testimony from nine witnesses into allegations that top politicians knew about and used underage prostitutes in the 1980s.

Among those implicated are:

Prince Bernhard of the Netherlands was the first president of the Bilderberg Group. Reportedly, as a child, Regina Louf visited Prince Bernhard's yacht Jumbo VI. Regina Louf was one of the child victims of the murderous Dutroux pedophile gang.

A summary of testimony that appeared in the Dutroux affair reads:

"This person wrote about the existence of a sect in the Netherlands consisting of about 300 members, many with backgrounds as lawyers, jurists, judges and police officers.

"There was a specific focus on maintaining Dissociative Identity Disorder (multiple personality disorder) in the children.

"Apparently, a whistleblower who tried to inform the police was disbelieved and soon thereafter disappeared.

"The letter specifically mentioned Villa Westflier in Markelo (in Holland) as a place where abuse had taken place."

The Westerflier estate in Markelo had previous inhabitants with very close ties to I.G. Farben, that after WWII the estate became a boarding school for young girls with emotional or behavioral problems, and... that this estate has been in the Schimmelpenninck family for centuries.

A second summary of testimony that appeared in the Dutroux affair reads:

Catharina (PV 150.006, February 20, 1997) stated she was the daughter of a wealthy businessman who was involved in a sadistic and violent child abuse network spanning from Italy and Switzerland to Belgium and the Netherlands.

The headquarters of the sect would be in Zurich.

Among the child abuse locations in the Netherlands she mentioned "In Dordrecht in the house in de Spijkermandt" and that the "attic is organized for a Nazi sect".

Some of the children's bodies would disappear "via a butcher shop in Rotterdam in the Van Hellemondstraat".

Among the members would be lawyers and army officers.

Various allegations have been made against top people in the Netherlands:

"The great-grandfather from [prince] Friso’s mother’s [queen Beatrix] side, a German prince named Hendrik, raped his own daughter, the mother of queen Beatrix, as a result of which a daughter was born.

"The father of Friso, Claus, was a homosexual who also used children for sexual pleasure.

"The lawyer of the Queen and main guardian of the crown prince, Friso’s brother, was a sadistic pedophile against whom even testimony of child executions exists."

The Dutch whistleblower, Micha Kat, has been put on trial.

How might the CIA and Mossad control the Netherlands?

Are some top Dutch people involved in child abuse and the drugs trade?

Documents in the case pointed at the involvement of Dutch politicians in the Dutroux child abuse scandal.(Joris Demmink - Wikipedia)

In 1998 Dutch prosecutors in Amsterdam were working on the 'Rolodex case' in which high-ranking people were suspected of being members of a child abuse gang. (911:Joris Demmink scandal - Wikicompany)

Among the suspects were a former cabinet minister, the personal counsel of queen Beatrix and two leading criminal prosecutors.

The police was preparing to make arrests, when the whole operation was shut down.

It was later reported, in the so called 'Runderkamp-papers', that a top official in the Ministry of Justice in the Hague, Joris Demmink, played a role in the affair.

He was suspected of being a member of the gang.

He was suspected of leaking information to the suspects.

In 1998 Dutch TV broadcasted two items about criminals smuggling young children to the Netherlands from Eastern Europe for sexual purposes.

Reportedly, in these taps one can hear a very high ranking official from the Ministry of Justice named 'Joris' 'ordering' some children for the weekend.

In 2003 two Dutch magazines reportedly published long and detailed stories about Joris Demmink abusing under-aged prostitutes in a public park in the south of the country (city of Eindhoven).

BALLIN is reportedly a Bilderberger.

Reportedly he is a member of Bilderberg. (Bilderberg 2009 Attendance List)

He has been the Dutch Minister of Justice.

It became known that the inter regional detective squad (IRT), with permission from both departments, had been bringing in billions of guilders worth of cocaine and other drugs into Holland.

(Chronology of the Netherlands )

It was claimed that this was a sting operation.

In 1996 a parliamentary inquiry commission published its report on the IRT affair.

The commission found that large quantities of drugs had been smuggled into the country and marketed with the help and connivance of the government.

The commission chairman, Maarten van Traa, was killed in a traffic accident shortly after the report was published. (Chronology of the Netherlands)

1. The 'crotch bomber' was escorted by a 'well-dressed' man who apparently had access to the boss of the Israeli firm that handles security at Amsterdam.

2. The US government has the support of its Dutch vassal state.

3. The Dutch Minister of Justice was Ernst Hirsch Ballin.

Ballin called for the immediate introduction of full body scanners at Dutch airports.

4. Dutch interior minister, Mrs. Guusje ter Horst is 'routinely let off the hook by the police whenever she is caught driving while drunk'.

She said that the world had escaped disaster when the 'crotch bomber' plan was foiled.

5. Mr. Joris Demmink, the Dutch justice ministry's former director general, 'is being blackmailed by the Turkish intelligence service, at least since 2002.