TRUMP IS AN ESTABLISHMENT INSIDER


Andrew C McCarthy is a Conservative.

He wonders when Trump backers will realise that they have been had.

Donald Trump is the Washington establishment...

While Boehner was surrendering, Donald Trump was backing him to the hilt: a staggering $100,000 contribution to the Congressional Leadership Fund - Boehner's super PAC, formed largely to fend off conservative primary challenges against GOP establishment loyalists...

It is the same amount Trump gave to the Clinton Foundation... 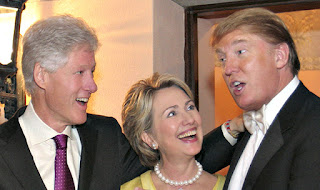 Trump says: "I've always liked Hillary." She and Bill are members of my club and they're wonderful people." dailymail. The Clintons were honoured guests at Trump's third wedding.

It doesn’t seem to register with Trump voters that he is promising to give legal status to millions of illegal aliens after temporarily deporting them...

In just the last three years, Trump has tweeted in apparent support of the ... immigration bill ... and has urged giving illegal aliens a 'path' to legal status...

If Trump were elected president, there would not be the mass deportations his followers crave; he would skip that step and move on to the amnesty they abhor.

Trump is the Washington establishment, the very embodiment of its progressive pieties, cloaked in tough-guy bravado.

Jeffrey Epstein's Nadia, who learnt to fly at the same Mossad-linked airfield as the Hebrew-speaking Mohamed Atta. JEFFREY EPSTEIN and 9 11. Trump is a close buddy of Epstein. 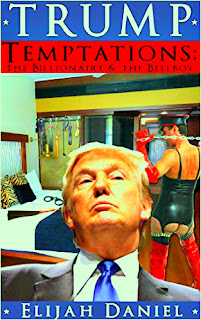 Trump backer Jerry Falwell and 9 11 Flight school's owner, Wally Hilliard. Falwell received the Jabotinsky Medal, awarded for outstanding services to Israel. Falwell is the only non-Jew ever to receive the medal.

Trump denounced Pat Buchanan as "isolationist" and an "extremist". 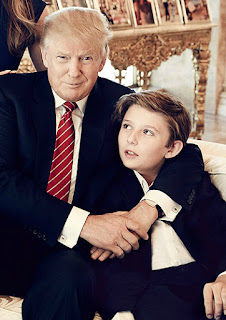 Above we see Donald Trump and Barron Trump.

Retired Senator Bob Dole says that Donald Trump is being backed by the establishment.

Bob Dole,"always one to spill the beans ... decided he really didn't give a damn about propriety anymore" and thus admitted that Trump is the establishment's man. 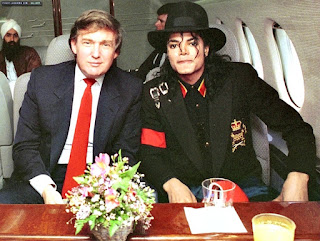 Donald Trump IS The Establishment.

Roy Cohn, who 'ran child abuse rings for the CIA'. The C.I.A., Mind control & Child Abuse. Roy Cohn's clients, as a lawyer, included the Mafia figures Tony Salerno, Carmine Galante and John Gotti. On at least one occasion Trump and Salerno "met in Cohn's apartment". How Close Was Donald Trump To The Mob? - The Federalist.

Engin Yesil and Raoul Goldberger, who have been involved in the trade in Cocaine.

Felix Sater, an ex-convict, who identified himself a "senior advisor to Donald Trump". "Sater has mafia and Russian criminal ties, as well as a 1998 racketeering conviction." [264][265][266]

Jerry Falwell, who has been linked to the CIA and 9 11

Gregory T. Angelo, the president of the Log Cabin Republicans, an advocacy group for gay Republicans.