1. Donald Trump has been compared to the billionaire Silvio Berlusconi.

Trump has described Berlusconi as a nice man.

Berlusconi got elected as Italy's Prime Minister when he persuaded large numbers of Italians that he would fix Italy's problems.

Berlusconi made a fortune in real estate

Berlusconi is a fan of Netanyahu.

Berlusconi has alleged links to the Mafia. 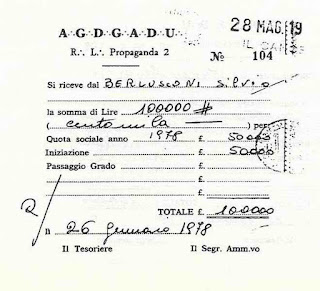 Berlusconi has alleged links to the CIA's Operation Gladio.

In June 2013, Silvio Berlusconi was found guilty of paying Karima El Mahroug for sex when she was 17 years old, and of abusing his powers in an ensuing cover up.

2. The USA's Federal Election Commission required Donald Trump to list all entities for which he serves as an executive.

Here are some of them:

3. Bernie Sanders has announced that he will not address the pro-Israel lobby AIPAC's annual policy conference - the only presidential candidate to skip the gathering.

The post is entitled "Outsourcing Creates Jobs in the Long Run."

" I have to take the unpopular stance that it is not always a terrible thing."

Trump noted a study "that showed how global outsourcing actually creates more jobs and increases wages, at least for IT workers":

"The study found that outsourcing helped companies be more competitive and more productive. That means they make more money, which means they funnel more into the economy, thereby, creating more jobs."

"I know that doesn't make it any easier for people whose jobs have been outsourced overseas, but if a company's only means of survival is by farming jobs outside its walls, then sometimes it's a necessary step. The other option might be to close its doors for good."

5. The USA's Federal Election Commission required Donald Trump to list all entities for which he serves as an executive.

Here are some more of them: