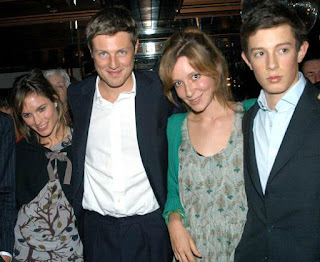 Zac Goldsmith was married for ten years to Sheherazade Ventura-Bentley.

"I made three claims.

"And we know the investigations were so bad that the Home Secretary, not just me, initiated the Goddard inquiry, in part, on the back of that...

"I absolutely stand by those claims. It is essential the inquiry continues and that there is closure on a really ugly episode because there is no doubt that those things happened."

Zac Goldsmith is a supporter of direct democracy, such as Switzerland's model of using referendums.

Zac Goldsmith is the middle child of the eurosceptic Sir James Goldsmith, a member of the prominent Goldsmith family of German Jewish descent and his third wife, the Anglo-Irish aristocrat, Lady Annabel Vane-Tempest-Stewart.

His maternal great-grandfather was the 7th Marquess of Londonderry, the well-known Ulster Unionist politician.

Zac Goldsmith, the Member of the British Parliament for Richmond Park in London, called for an inquiry into child abuse "cover-ups" by local authorities, such as that at Richmond.

In 1990, investigations into the Elm Guest House boy brothel revealed that Richmond Social Services and the police had been 'wrongfully taking ... children into care (and) falsifying evidence."

Reportedly, members of a paedophile ring, based at Elm Guest House in London, sexually abused young boys from Grafton Close children's home in Richmond, in London.

Allegedly, Sir James Goldsmith is the father of Princess Diana.

Both the Goldsmiths and the Rothschilds, like UK Prime Minister David Cameron, have Jewish-German ancestors.

Zac Goldsmith heads a group of seven members of parliament calling on the UK government to set up an independent panel to investigate all the sex abuse claims and analyse why important documents have disappeared.

Police surveillance videos said to be of top people involved in a paedophile ring have gone missing.

"Very serious questions around Elm Guest House (boy brothel) in Barnes have gone unanswered for so long that many have simply concluded that the authorities aren’t interested in uncovering answers.

"The same seems to be true of other inquiries into child sex abuse at institutions across the country."

Some people believe that in certain countries the police and the security services are deeply involved in the kidnapping of children and in the running of pedophile rings.

Sir James Goldsmith who has links to the Rothschilds (Cached). He multiplied his fortune as a brash corporate raider in the United States during the 1980s (Billionaire with a Cause vanityfair.com ) "He inherited many of his traits from his father Frank Goldsmith, the descendant of a distinguished Jewish banking family from Frankfurt once as famous as the Rothschilds." (Obituary: Sir James Goldsmith - People, News - The Independent)

Diana was like her father in looks, "but also in her charisma, her sexual appetites, her madness, and her propensity for causing trouble."

Who might want to silence Diana?
Posted by Anon at 12:51