The police appear not to be investigating the alleged Hampstead child abuse gang.

"Mr D. was listed as WANTED on the Police National Computer, but this was CANCELLED by a named police officer in the same document.

"53 named suspects were not formally interviewed."

Marc Dutroux, who said that the police helped him and his gang to kidnap children, who were then abused by top people.

"Children as young as five are being forced to take part in torture and violent sex acts as part of a brutal underworld of ritual abuse in East Scotland.

"A leading charity has received as many as five calls a day from survivors of gruesome ceremonies that have included the stealing of babies and grotesque sexual abuse.

"A Dundee police spokeswoman said: "We are not aware of any issues of that nature in Tayside Division."

The police failed to protect the children of Rotherham, in England.

The abusers were reportedly in league with the police.

In 2014, Professor Alexis Jay reported that, in Rotherham, at least 1,400 children were sexually abused over a 16 year period.

Jessica became a victim in Rotherham when she was just 14.

She says that the police repeatedly refused to take any action.

Jessica says: "A lot of police officers were corrupt and they were working for my abuser. I know that because of things I’d seen when I’d been with him.

"One time I went missing. I was with my abuser and an officer came in a marked car. He told him, 'I've come to give you a heads up that there could be a warrant out for your arrest'.

"Another officer bought steroids from him. Once the police found me in bed with my abuser - but I was the one who got arrested."

Lawyer David Greenwood says there is evidence "that police and perpetrators have spent social time together."

Lawyer David Greenwood says "most of the women I represent have complained about a poor police response.

"Five girls I know have said they complained directly to police about serious sexual assault and that police either dissuaded them from pursuing the complaint or refused to acknowledge it."

The group Parents Against Sexual Exploitation of Children (Pace) complained to the Home Office in 2002 about suspicions of links between police officers and abusers.

Adele Gladman worked for Pace and produced a report into abuse in Rotherham in 2002 which criticised the police and council. Police were furious with the report and it was never published.

Adele said a police officer approached her outside her office.

"He and a colleague said words along the lines of 'Wouldn't it be a shame if these perpetrators found out where you and your family lived'.

"And I took that as a direct threat to my personal safety. The message was very clear."

In the UK, Jason Cullen (Jason Hodson) claims he was sexually abused by a senior Metropolitan Police officer.

Cullen (Hodson) claims the abuse took place in 2000 when he was 16, but no one was ever arrested, charged or prosecuted following the allegations.

Cullen, from Croydon, made the allegation at Sutton Magistrates’ Court on 4 April 2011.

Cullen, whose real name is Jason Hodson, was arrested on 25 February 2011.

Bryn Estyn, used as a boy brothel by top people.

On 19 November 2007, Terence Grange resigned as Chief Constable of the Dyfed-Powys Police in Wales.

According to The Times, Grange was being investigated in connection with his force’s dismissal of child abuse claims against a judge.

This followed claims made by the judge’s ex-wife that the judge had given a child a sexually transmitted disease, viewed child pornography websites and misused transcripts from child abuse cases that he had presided over.

Grange was spokesman for the Association of Chief Police Officers on child protection issues. 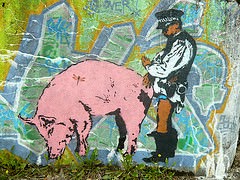 
Cynthia Owen (born Cynthia Murphy) claims that she and her siblings were subjected to Satanic ritual abuse - by her parents and at least nine other people.

The Cynthia Owen case involves the Dalkey "house of horrors" near Dublin, in Ireland.

"Owen attempted to bring the case against her parents to the prosecuting authorities seven times, but each time it came back citing lack of evidence."

Cynthia Owen: 'My mother was evil' | The Guardian

The late Peter Murphy who was allegedly part of satanic child abuse group led by a policeman.

The police in Ireland are now, in May 2013, re-examining the Dalkey "house of horrors".

There are claims that a paedophile ring led by a policeman was involved in the rape and abuse of children.

"ABUSERS: Peter Murphy Junior; his brother Joe Murphy and (right) the man who is alleged to have been the organiser of the paedophile ring." Sunday World.

In the Dalkey case, no one was held to account over the murder of a baby, called Noleen, stabbed to death in 1973.

In 1973, the police's murder investigation looked like a cover-up of a satanic child-abuse ring.

In 2005, senior counsel Patrick Gageby found that "most of the surrounding documents and exhibits... were lost or mislaid."

Noleen had been stabbed to death with a knitting needle.

Three of the men identified by Cynthia Owens as being members of the Dalkey paedophile ring which abused her and other children. Sunday World.

The case was re-examined in 1995 after the mother of the baby, Cynthia Owen, who was 11 when the baby was born, returned to Ireland seeking information.

She says she was repeatedly raped by her father, Peter Murphy, and that she was sold for sex to a group of men which included three policemen.

2010: Cynthia Owen's solicitor Gerry Dunne said his request to meet with the then Justice Minister Dermot Ahern, about his concerns over the investigation, had been repeatedly turned down.

Cynthia has a number of siblings.

Another brother, Michael, disappeared in 2002.

Sister Theresa committed suicide shortly after the discovery of his body in 2005.

A friend of Theresa's testified at the trial, stating that Theresa had spoken to him at length about her sexual abuse in childhood.

Theresa Murphy committed suicide on February 24, 2005 as a result of childhood sexual abuse, this finding was supported by police evidence.[15]

Theresa was the child of her older sister, Margaret Murphy.[12]

Who are the Dalkey child abusers?

"Of the six we photographed ... one is working directly with children...

"A further member of the 'ring' is a taxi driver who regularly ferries children in his car and the last is a former council worker and avid church goer."

A list of more than 2,400 Britons who the FBI believes have subscribed to paedophile websites contains the names of more than 100 police officers, including a detective chief superintendent, it was revealed.

The list - which contained the names of the two Cambridgeshire police officers who worked on the Jessica Chapman and Holly Wells murder inquiry and who have since been charged with child pornography offences - was supplied to Britain's National Crime Squad after three people suspected of involvement in paedophile websites were arrested in Texas.