As news of the Hampstead scandal spreads, we look at some links.

There is a video of Ricky Dearman performing California Dreamin' by the Mamas & the Papas in a church.

Ricky plays the part of rock star John Phillips, aka Papa. Mackenzie Phillips confessed to having a consensual sexual relationship with her father John Phillips.

A small boy who used to visit Peat’s children’s home told his father that Peats had injected something into his testicles.

In one photo, a two-and-a-half-year-old girl is held by her hands and legs 'like a hammock'

From the Herald, Goa:

The sandy beaches and the sleepy hamlets of Goa are no longer safe. They are, in fact, turning into a hideout for members of the underworld.

Goa. David Headley, the organiser of many terrorist attacks in India, has a link to Goa and to an American in Goa.

The officials say that Headley was in constant touch with an American who has been living in Goa.

Reportedly the American in Goa has been running several business, including beer bars and massage parlours, in Goa.

Anjuna beach in Goa has a Chabad House, a Jewish prayer home, which is frequented by Israelis during the tourist season.

Israeli tourists, who form a sizeable portion of the foreign tourists in Goa, visit Goa in the months of October to February.

(No central input on Headley’s stay in Goa: police) ISRAELIS, DRUGS AND TERROR IN GOA

Israel reportedly wants to stir up hatred between Moslems and other religions.
Lucio Mascarenhas (above), from Goa, was quoted by Anders Breivik.

Breivik (or his Mossad scriptwriter) wants the European and Indian 'resistance movements' to learn from each other and cooperate as much as possible.

David Headley, the American who has admitted planning the Mumbai attacks of 2008.

Headley said that he was a Jew.

At a Jewish prayer centre in India, Headley met a Jewish couple.

The couple reportedly gave him the address of a Jewish Chabad house in Goa.

Headley moved to Goa, a part of India inhabited by Israelis with military connections and various Israeli mafias.

(ISRAELIS, DRUGS AND TERROR IN GOA) 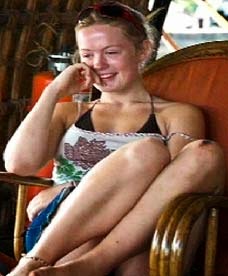 Scarlett Keeling, pictured enjoying her holiday in Goa before she was murdered. Read more: http://www.dailymail.

Places like Calangute in Goa are hotspots for Israelis.

Senior police officers "confirmed that special measures are in place around such places, which are claimed to have been surveyed by terror suspect David Headley during his Goa visit."

Highgate School (above) is applying to build a bunker underneath a playing field.

In Hampstead, the Tavistock Children's Day Unit "is be moved to a new location just metres away from a paedophile therapy centre."

A senior figure in Catholic education who was found in possession of more than 5,000 images of child abuse has been spared prison and could even return to working in the church.

The court heard that he had taught religious education (RE) at Maria Fidelis Catholic School.

Police discovered more than 5,000 prohibited images of children on his computer.

One showed a six-year-old child wearing a cropped top with the words “Paedophiles, can you blame them?” printed on the front, while another showed a nine-year-old engaged in a sex act with a dog.

I am British (British passport) staying in LA, USA for about 4 months now, looking to fly out to India Goa from LAX via Bangkok, to visit my sister who lives there with her Indian husband, Savio. I am looking to fly towards the end of March and go for about 1 month but how does one go about getting a visa for India if one is British staying in LA?

Can i get the visa from the USA without the hassle of getting/going to the UK?

How Not To Get An Indian Visa

He HAD to have been running other dungeons with girls other than his daughter, and made money by selling them sexually.

Natascha Kampusch also taken in Austria, may have been on of several or many taken by her captor, Wolfgang Priklopil, who supposedly killed himself, when she escaped.

The kids in both the French and German SRA documentaries describe each other's countries, or people from there, and the Germans speak of being taken to the Wewelburg near Paderborn GER in the castle dungeon, chained and abused....

Michael Aquino (US Army Psyops expert and high up Intelligence officer, a former Church of Satan member , and founder of the Temple of Set, and SS aficionado)  writes on his website, that he did a ritual to call up the spirit of Heinrich Himmler, who made Wewelsburg a spiritual capital for the SS, with it's own slave labor camp.

Aquino was named by some witnesses as a major player in the Franklin Coverup scandal, also acting bag man for the underage sex and drug trafficking ring money in part going to support the US congress support banned Nicaraguan Contras, which ban Oliver North and a covert shadow group of CIA drug traffickers and arms traffickers, even dealt restricted Stinger missiles to Iran, in exchange for holding US hostages past the end of the Carter vs Reagan election time.

Terrorism, drugs, the sex trafficking of children and teens, and the blackmail based corruption that comes with it, is the order of the day, the week, the month, and the years. Government business as normal. It's time the People went cloak and dagger, you think?