According to "The Copenhagen PsyOp"

(We should remember that ISIS is run by the CIA and its friends.)

The Facebook page was swiftly deleted after people began pointing out that it was fake.

2. Apparently fake witnesses have given their accounts to the media.

One witness refers to curtains at the culture centre blocking the view of the attacker.

Yet the photos of the scene show no curtains.

And if there had been curtains, what would witness Helle Merete Brix, inside the centre, have been able to see?

She claims she 'saw one of them running by, wearing a mask.' 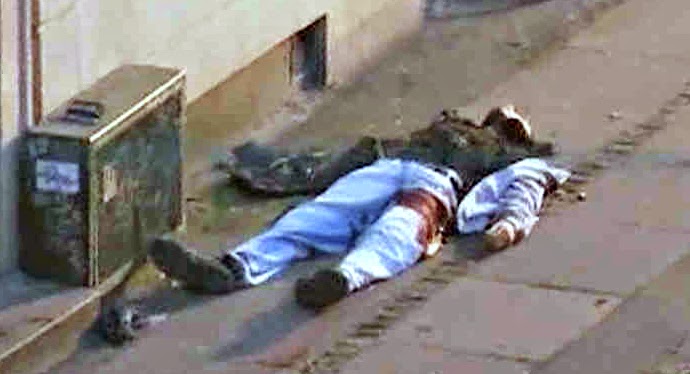 3. The so called 'dead body of the attacker' looks fake?

"He either had two prosthetic legs or we are staring at a dummy/cpr doll."

The dead body doesn't match the description of the alleged suspect.

4. In the BBC's exclusive audio recording, a woman's speech is interrupted by alleged gunfire.

"There's not a cry for help being heard, no crowd panicking, no yelling of any kind what so ever not even whispering among the supposed targets, as would be expected when people come under attack from live gunfire."

5. In January 2015, there was a terror drill by the security services at Norreport station, where the 'attacker' was later shot dead.

There is usually a terror drill before a false flag attack.

6. According to the Wall Street Journal, Jorgen Skov, head of the Copenhagen police, says that "there is nothing to suggest that several perpetrators are involved.".

Helle Merete Brix stated earlier that "they tried to shoot their way into the conference room … I saw one of them running by, wearing a mask. There was no way to tell his face."

The cultural centre in Copenhagen - a strange lack of blood and bullet holes. dailymail

The February 2015 attack on Copenhagen looks like a false flag attack carried out by Mossad, the CIA, and agents of Danish security services?

"Denmark is a client state of the USA and is presently ruled by several American CIA generals residing at the Danish army intelligence headquarters at Sandagergaard 8 miles from the center of Copenhagen." - Steen Hjortsoe, Copenhagen.

The man accused of carrying out the Copenhagen false flag attack is Omar El-Hussein.

Reportedly he was inspired by the Mossad-NATO led Charlie Hebdo false flag.

Omar was released from prison two weeks before the February 2015 attack.

"Some say the shootings (near the railway station) were part of a turf war over the lucrative hashish trade in the city."

Above we see the alleged attacker in February 2015.

Born in Denmark, Omar El-Hussein joined the gang called The Brothas and roamed the streets with a knife or a gun.

He was known to Danish intelligence services.

Police tracked El-Hussein to an apartment next to Norrebro metro station at around 5am.

When he emerged he was killed in a hail of bullets.

1. On 14 February 2015, in Copenhagen, there was a false flag attack at the Krudttønden cultural centre.

2. And early on the morning of 15 February 2015 there was a false flag attack near Copenhagen's Great Synagogue.

A bat mizvah ceremony attended by 80 people was taking place there.

Dan Uzan, a 38-year-old Jewish community member who was on security duty, [18] was allegedly shot in the head and allegedly later died.

3. Later in the morning, the 'patsy', a 22 year-old Dane with a background in criminal gangs, was shot dead near Nørrebro station

Jens Madsen, head of Denmark's intelligence service, PET, said the suspect was known to his agency.

Two officers of Denmark's intelligence service were at the cultural centre when it was attacked.

The alleged attacker was able to escape from the cultural centre in a Volkswagen Polo.

Denmark is home to Morten Storm, who reportedly was used by the CIA and MI5 to finance terrorism.

Danish Prime Minister Helle Thorning-Schmidt (centre) is not always in control of events.

What was the motive for the Copenhagen attack?

After the attack, Benjamin Netanyahu said to the Jews of Denmark and the rest of Europe that "Israel is the home of every Jew ... Israel awaits you with open arms."[33]

The American David Headley who planned many terror attacks in India.

The 'crypto-Jew' and 'CIA agent' David Headley reportedly travelled to Denmark to scout out locations for false flag attacks.

Headley claimed he worked for the CIA.

(HEADLEY INTRODUCED HIMSELF AS A CIA AGENT- aangirfan)

Denmark has many influential Jews.

The editor of Jyllands-Posten, Flemming Rose, is reported to be a Ukrainian-born Jew who is working for Mossad.

In March 2010, we learnt that Herbert Pundik, a top Danish journalist, worked for Mossad.

(Respected Danish journalist admits 'I was a Mossad agent'.)

According to former Mossad agent Victor Ostrovsky's book, By Way of Deception:

"The relationship between the Mossad and Danish intelligence is so intimate as to be indecent."

Rasmussen is a Bilderberger.

"An enthusiastic follower of George Bush, like his friend Tony Blair he told outright lies to the Danish people about the existence of Iraqi weapons of mass destruction.

"He also lied about the content of secret intelligence reports the Danes had on Iraqi WMD...

"A very brave and honourable man, Major Frank Grevil, stepped forward to tell the Danish people that Rasmussen had lied about the content of intelligence reports.

"Rasmussen did not show his famed support for freedom of speech in the case of Major Frank Grevil, who was jailed for telling the Danish people the truth..."

Denmark is a colony of Israel.