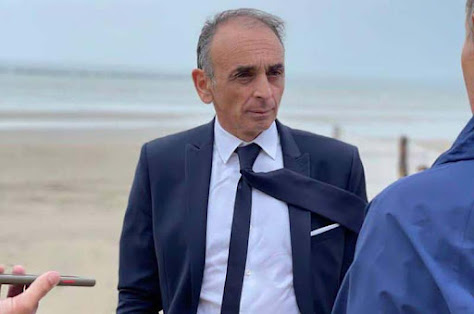 Unknown commented -
Speaking of Macron and the Rothschilds - Far-right French Jew Éric Zemmour, from an Algerian-Jewish family, has rocketed into 2nd place in polls for the first round of the April 2022 French Presidential election, at 17% preference, ahead of Marine Le Pen at 15% and behind only Emmanuel Macron at 24%
https://www.euractiv.com/section/politics/short_news/far-right-eric-zemmour-overtakes-marine-le-pen-in-poll/
Zemmour has been a French TV personality since 2003, "allowed to say things on French mainstream TV channels for which anybody else would be arrested and imprisoned", says Israel Shamir.
Anti-immigration Zemmour, speaking roughly about Muslims and Africans, is seen as the 'opponent' of his fellow Jew of North African heritage, pro-immigration Bernard-Henri Lévy.
Much harsher than Le Pen, Zemmour speaks of mass deportations, and makes a shocking proposal - offensive to even many anti-immigrationists - that Muslims in France be forbidden to give their children Muslim names such as Mohammed.
Zemmour would revive an old law demanding that baby names be either of Christian saints or names in 'ancient usage' in France, such as Jewish Bible names.
Zemmour is getting a media 'lift' that Le Pen has not had, though Zemmour is well-known on French television screens.
Some see Zemmour as a catalyst for 'strategy of tension' and civil conflict, given Zemmour's ethnic rhetoric and his attack on private Muslim family life, seeking to impede how Muslims name children and create massive Muslim anguish.
Zemmour is notably distracting from both vaccine pass issues and economic issues.
Others see Zemmour as a game element helping to push aside more moderate candidates in the first presidential election round, so as to once again give victory in the 2nd round run-off to the significantly unpopular Macron.
Some say Zemmour and Macron are both supported by the same media and banking interests.
Youssef Hindi writes of "Operation Zemmour-Macron ... Zemmour, like Macron, endorses the euro, the EU, NATO, the financialisation of the economy (about which Zemmour doesn't say a word, as he is supported by the bankers), dictatorial tyranny, the vaccine pass and all that follows from these"
https://www.egaliteetreconciliation.fr/L-operation-Zemmour-Macron-et-le-grand-remplacement-de-l-extreme-droite-65740.html
Posted by Anon at 09:33