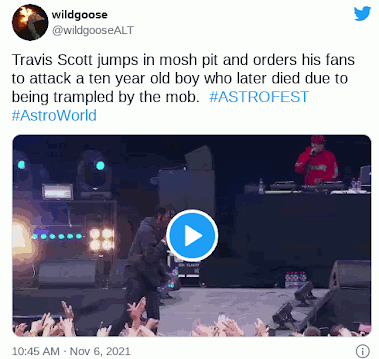 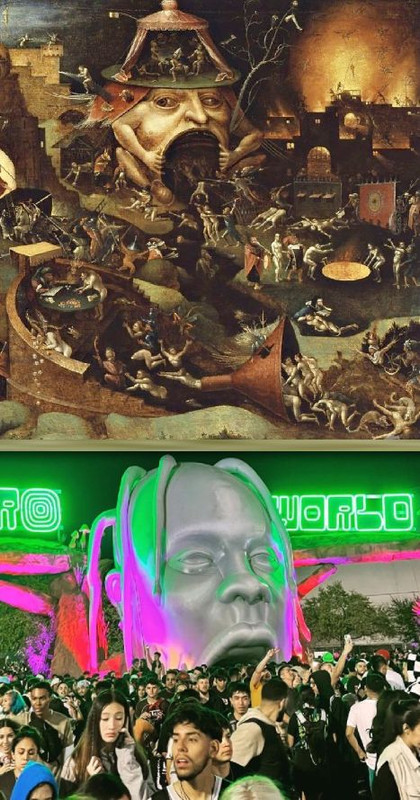 Astroworld - Christ in Limbo
Unknown commented -
'Scene at deadly rap concert in Texas, has strong eerie resemblance to a circa 1510 painting by Hieronymous Bosch
'Travis Scott is a popular 30-year-old rapper, star of an 'Astroworld' music festival in Houston, Texas, where at least 8 people have died, rather mysteriously, of apparent 'heart attacks' or similar, though indeed a stampede toward the exits followed as news of the collapsed victims spread through the crowd.
'Some reports say victims were 'injected' with something by an assailant
https://www.hotnewhiphop.com/unconfirmed-reports-reveal-astroworld-festival-victims-may-have-been-injected-with-drugs-news.142336.html
'The entrance to the festival is a huge open-mouthed head sculpture of rapper Travis with an open mouth, through which people walk
'The whole scene looks astonishingly like the hellscape art of Hieronymus Bosch (c. 1450-1516) in his famous painting of 'Christ in Limbo', where a similar open-mouthed huge head is also at the centre of demonic chaos
'The Bosch painting, and a photograph of the concert scene, together -
'https://i.postimg.cc/YS9Bym9J/Astroworld-Bosch-Christ-in-Limbo.jpg '
Posted by Anon at 07:04