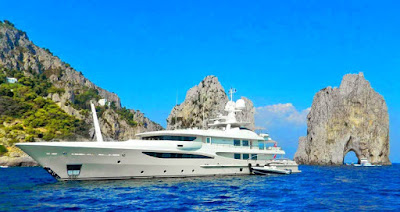 "Mega yachts populate the waters off the southern face of Capri.

Inside the Rich, Young and Wild Scene of Capri 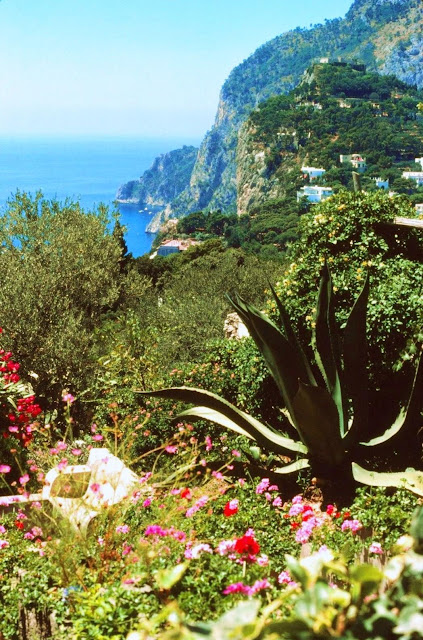 People who have loved Capri include - 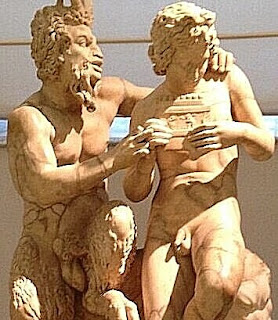 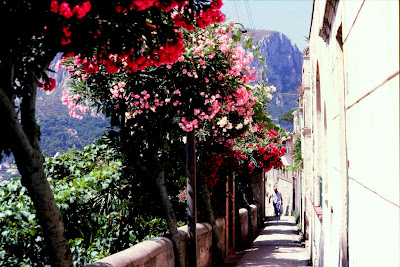 Krupp was a politician and a close friend of the Kaiser.

Krupp was accused, in opposition newspapers, of having had sexual relations with various local boys on the island of Capri. 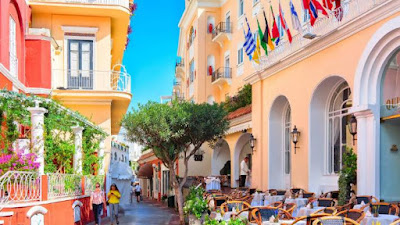 When Krupp was first in Capri, he stayed at the Hotel Quisisana.

In 1897, Oscar Wilde briefly stayed at the Quisisana, with his lover Lord Alfred Douglas. 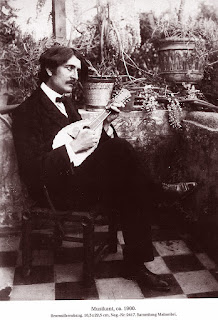 Other gay characters who lived on Capri included -

The author Norman Douglas, whose most famous novel, South Wind, is set on Capri. 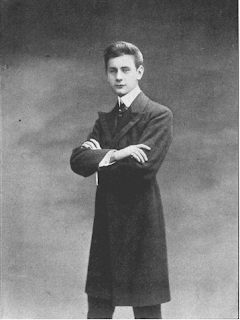 Fersen's Villa Lysis is on Capri.

In 1903, Fersen was put on trial in France for arranging tableaux vivants of nude or semi-nude schoolboys.

He was given a very short jail sentence.

Fersen moved to Capri with his long-time lover, Nino Cesarini, whom Fersen had met in Rome when Nino was aged 14. 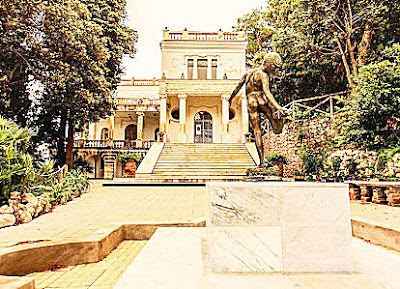 Fersen became a "character" on the island in the inter-war years, featuring in novels by Compton MacKenzie and others.'

Fersen died after drinking a mixture of cocaine and champagne - in 1923.

The famous German painter Paul Hoecker (1854-1910) stayed with Ferson on Capri after it was reported that Hoecker had used a male prostitute as a model for a painting of the Madonna. 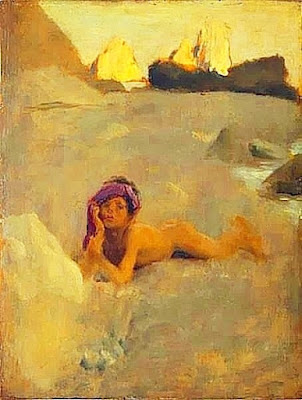 CAPRI, CATAMITES AND THE COGNOSCENTI

Young boys were an interest for novelist Graham Greene, who made his home on Capri

Young boys were an interest for Emperor Tiberius, German industrialist Friedrich Alfred Krupp and many others who made their homes on Capri.

This island of satyrs has a licentious reputation.

(Source: Graham Greene, The Man Within, by Michael Shelden, publ.Heinemann.)

Greene's friend Doctor Elizabeth Moor confided in her friend Gitta Bittorf that the boys used to stay with Greene on Capri for one or two days.

People in the town of Anacapri told Scoppa "the boys came for sex."

Greene was sufficiently well liked by his fellow citizens to be given the title of Honorary Citizen of Anacapri.

It is said that the walls of his villa were covered with huge pornographic paintings.

According to some sources he enjoyed having mullet nibble his crumb-coated genitals as he relaxed in rock pools.

And he used to have his organ covered in milk

and honey so that babies would suckle his glans.

There were stories, put about by his enemies, that Tiberius had boys flung into the sea from the high cliffs beneath his villa.

One of the hundreds of boys who lived with Tiberius was Vitellius, who after working as catamite for Caligula, Claudius and Nero, became Emperor in 69 AD.

So they can't all have been flung from the cliffs.

Multimillionaire German industrialist Friedrich Alfred Krupp (1854-1902) set up a comfortable 'palace' in a grotto on Capri, where he entertained underage Italian boys, mostly the sons of local fishermen.

Sex was performed to the accompaniment of a string quartet, and orgasms were celebrated with bursts of fireworks.

When Krupp's wife heard rumours of what was going on, she went to the Kaiser, who had her put into an insane asylum.

The Krupp military-industrial empire was too vital to Germany.

However, the German press eventually found out about Krupp's activities, and printed the whole story, complete with photographs taken by Krupp himself inside the grotto.

Capri was where Oscar Wilde was reunited with Lord Alfred Douglas after being released from jail.

Noel Coward took the title of his song 'A Bar on the Piccola Marina' from the island's favourite meeting place for 'free spirits'.

Capri was home to paedophile Norman Douglas, who was Greene's best friend on the island in the late 1940's and early 1950's.

Norman Douglas was the author of 'South Wind' which captured the air of sensuality associated with Capri and Southern Italy.

Famous Scot, Compton Mackenzie, was apparently another boylover who fell for Capri.

He moved there with his wife in 1913 and remained about ten years.

Two of his books were set on Capri: 'Vestal Fire' and 'Extraordinary Women.'

According to biographers, he bought a small villa in the plain of Cetrella, 'where he used to hold his amorous encounters with young boys.'

In 1918, the arrival in Capri of a group of lesbians, gave Mackenzie the inspiration to write 'Extraordinary Women.'

"I sprang from the Sorrento sailing-boat onto the little beach.

"Swarms of BOYS were playing about among the upturned boats or bathing their shining bronze bodies in the surf....."

Munthe's autobiographical "The History of S. Michele" was published for the first time in English in 1929.

Since then this book about Capri has been translated into many languages and is now among the most read books after the Bible.

It was in 1887 that Munthe decided to settle on Capri and work as the municipal doctor.

Munthe's first visit to Capri had been in 1884 at the time of a cholera outbreak in Naples.

As soon as he had landed on the island, he had fallen in love with the ruins of a little medieval chapel dedicated to S. Michele, surrounded by a large vineyard hiding the ruins of a Roman villa.

He decided to create his dream villa called San Michele and bought a whole mountain to make this possible. "My house must be open to the sun, to the wind, to the sea, like a Greek temple, and light, light everywhere".

Munthe was a lover of the arts, a philanthropist, and a great lover of animals.

Baron Fersen of Adeswarde, born in Paris in 1880 of a family of steel industrialists, was another lover of Capri.

On 10 June 1903, the day of Fersen's engagement to the Viscount of Moupeou's daughter, he was arrested on charges of gross indecency and corruption of young boys.

After that event he decided to take up permanent residence on his favourite island of Capri.

Just what are the attractions of Capri to the rich, the famous and the cognoscenti?