The Kelly Family was an Irish-American-European music group.

They have sold over 20 million albums since the early 1980s.

The head of the family, Daniel Kelly Sr., was, in earlier days, "a clean-cut, intense conservative Catholic" who studied for the priesthood. 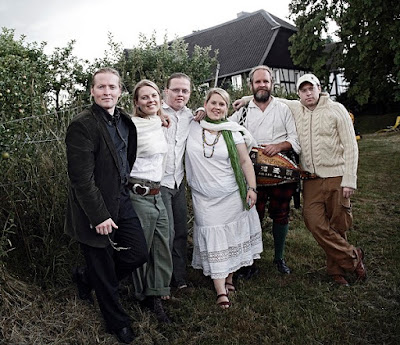 Daniel Kelly Sr. was described, allegedly by his children, as having a "tyrannical, controlling streak".

Jimmy, has criticized his father for not giving his children a formal education and imposing on them a "Huckleberry Finn" lifestyle.

He said that as The Kelly Family group began to dissolve, he had almost nothing left of the millions of dollars the family had earned.

The oldest daughter, Kathy, who managed most of the finances of the family, said that Daniel was more "free spirit than tyrant" but that "we got too big too fast, we should have cut things down some or handed over to professional management."[8]

According to : The Kelly Family - Wikipedia:


Daniel Sr was born in 1930 in Erie, Pennsylvania.

Joanne married Daniel in 1957 and is the mother of Danny, Caroline, Kathy, and Paul.

She went to Spain with Daniel about 1965, but returned to US with son Danny and apparently lost contact with other members of the family. Divorced Dan.[14]

John ("Johnny")  was the lead singer on many songs, and the favorite of young women fans early in the history of the group.

Jimmy, known as the rebel of the family, became involved in drugs and alcohol, and later joined a monastery briefly.

Paddy joined the Saint-John community where he was a monk. He recently quit the monastery and by late 2011 had returned to music-making.

Email ThisBlogThis!Share to TwitterShare to FacebookShare to Pinterest
Labels: An Angel, Kelly Family, Roses of Red, Who'll Come With Me