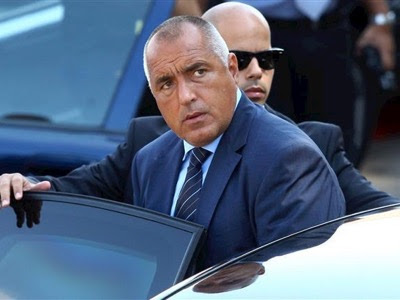 The 'head of one of the two Bulgarian mafia cartels' Boïko Borissov.

Boïko Borissov has been Prime Minister of Bulgaria since 2014.

"He has supplied drugs and weapons to Al-Qaïda and ISIS in Libya and Syria."

Bulgaria a member of both NATO and the European Union,


"In 2006, the United States ambassador in Bulgaria, John Beyrle, wrote that Borissov is connected to two major mafia bosses, Mladen Mihalev and Roumen Nikolov [2], the founders of SIC.


"In 2007, the U.S. Congressional Quarterly claimed that Borissov is implicated in 28 mafia murders.

"Borissov became a partner of John E. McLaughlin, Deputy Director of the CIA.

"Having become Prime Minister, Borissov was asked by the CIA to supply narcotics and weapons to the al-Qaïda and ISIS, in Libya and Syria.

"The latest news is that Bulgaria continues to illegally supply drugs and weapons to Al-Qaïda and ISIS."

Members of Daesh have been moved from Syria to Ukraine