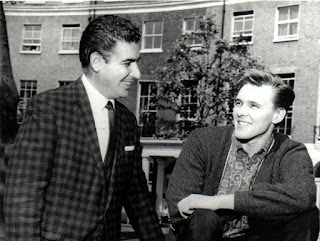 Parnes was the top UK impresario who began the pop business in the 1950s.

"From the mid 1950s Larry Parnes, 'the beat svengali' was prowling the clubs of Soho and no doubt the nearby 'Dilly' for young boys he could sexually abuse on the promise of becoming stars.

"From his bar at La Caverne on Romilly Street, W1 Soho, leading to Shaftesbury Avenue onto Piccadilly Circus he had the perfect base.

"There amongst theatrical producers and arty types he would meet such types as Lionel Bart and spot Marty Wilde and Tommy Steele..."

Jimmy Savile OUTED as a PAEDO.

Parnes had a penthouse property in South Kensington, and country mansions in Send, Surrey, and Icklesham, East Sussex.

Sir Jimmy Savile's nephew, who was taken by Savile to child abuse parties.

Jimmy Savile's nephew, Guy Marsden (above), says that a 14-year-old friend of his was sexually abused by Sir Edward Heath.

The lawyer David Jacobs had as his clients Larry Parnes, Brian Epstein and Lionel Bart.

"In August 1967, when Epstein was found by his housekeeper, dead from of an overdose of sleeping pills at his London home, Jacobs was quickly on the scene.

The mystery of David Jacobs, the Liberace lawyer - Telegraph

"In September of that year, Jacobs was involved in a bizarre case in which a Hungarian interior decorator was found half-naked, nailed to a cross on Hampstead Heath...

"Police, it was said, had been questioning Jacobs himself over the case...

"It was reported that following his death, police had found 'almost indecipherable notes' in Jacobs's hand in his red smoking jacket, leading them to question a number of young men and 'several well-known and titled people' about parties in West End flats and country houses...

"It is said that shortly before his death, Jacobs was approached by an emissary of the gangster Ronnie Kray - himself well known in London’s gay world - seeking his help.

"Ronnie and his brother Reg were due to stand trial at the Old Bailey, charged with the murders of George Cornell and Jack 'The Hat' McVitie."

The mystery of David Jacobs, the Liberace lawyer - Telegraph
Posted by Anon at 11:00