Jeremy Corbyn (above), a left winger, wants to be the leader of the UK Labour Party.

Can anyone remember Corbyn telling is that 9 11 was an inside job or that ISIS is run by MI6 and its friends?

His constituency is linked to widespread child abuse. 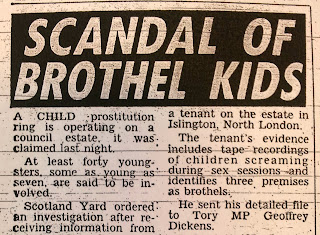 
Dickens then said that he had more evidence and was more certain than ever about the truth of his allegations. 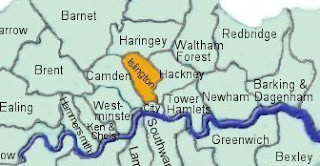 Islington is next to Hampstead.

Jason Swift and Tony McGrane were young boys living in a children's home in Islington.

Jason is believed to have lived in Islington council's Conewood Street children's home.

Sidney Cooke, Leslie Bailey, Robert Oliver, and Lennie Smith, were imprisoned in 1989 for the manslaughter of Jason Swift.

Cooke and his gang had sexually tortured and prostituted a number of boys.

The gang is believed to have killed at least nine children.[2]

Cooke was sent to prison.

In 1998, Cooke was let out of prison eight years early.

There have been allegations that very powerful people have been involved in a child-abuse ring connected to Islington children's homes.

She became a close friend of Tony Blair, who lived in Islington, a few doors away from Hodge.

In February 1990 Liz Davies and David Cofie, senior social workers, discovered evidence of sex abuse of children and reported it to a residents' meeting attended by Mrs Hodge.

In May 1990 Mr Cofie and Ms Davies were told by Lyn Cusack, assistant director of social services, to stop interviewing children about the abuse claims.

On 1 May 1997 Tony Blair moved from Islington to Downing Street.

In June 2003 Mrs Hodge was made minister for Children.

(Another minister under fire: call for Hodge to quit over child ...)
Posted by Anon at 23:53