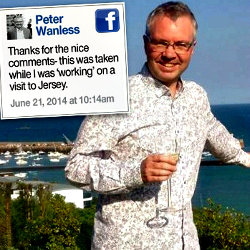 Why is  the boss of the NSPCC on the child abuse island of Jersey? He was at a private event organised by a friend.

Is the UK's National Society for the Prevention of Cruelty to Children (NSPCC) run by a spook?

There is a belief that the Kosher Nostra has taken over all the top UK charities.

In July 2014, Wanless was appointed to lead the 'whitewash' investigation into the disappearance of files handed to the Government in the 1980s that related to organised child sex abuse at Westminster.

A UK government investigation into child sexual abuse was led by a controversial 'insider'.

The 'review' was not led by Sir Jimmy Savile, as he was no longer available, but by Peter Wanless.

The former Chairman of the NSPCC, Sir Christopher Kelly, is, reportedly, a Freemason.