To gain a MAJORITY in the UK parliament, a party must win 322 seats.

The polls show Labour and Conservative neck and neck.

The Conservatives have 31% of the vote.

Labour has 34% of the vote, but, their supporters are concentrated in certain areas, and are not evenly spread, which works to their disadvantage.

A Conservative coalition, or 'loose agreement', could include the Liberal Democrats (24 seats), UKIP (3 seats) and the Democratic Unionists (9 seats), giving a total of 327 seats.

A Labour coalition, or 'loose agreement', could include the Scottish National Party (44 seats), the Greens (1 seat), Plaid Cymru (3 seats), and various other small parties (5 seats), giving a total of 318 seats, which is not enough to provide a majority.

One possibility is a coalition of the Conservatives and Labour, partly to frustrate the Scottish National Party.

UKIP has 17% of the vote, but because of the 'first past the post' syetem, they are expected to win few seats.

The Scottish National Party's leader Nicola Sturgeon is said to have performed best during the election campaign.

One reason for the popularity of the Scottish National Party may be that, as the Financial Times has pointed out, it has taken a 'Centrist' position while in government in Scotland.

It has avoided being either too Left-Wing or too Right Wing.

It has spent large sums on developing the economy of Scotland. 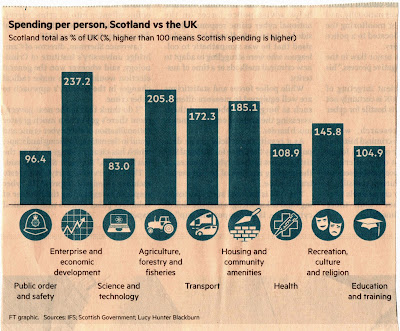 The SNP's record in power: less radical than you might think - Financial Times

It should be noted that a relatively large number of young people from England have recently emigrated to Scotland, to escape the woes of England.
Posted by Anon at 04:31