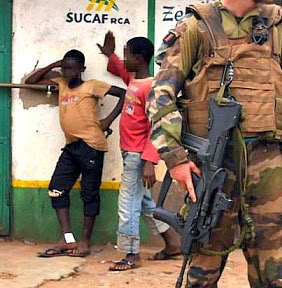 The latest example is from the Central African Republic.

A recent report details "the rape and sodomy of starving and homeless young boys by French peacekeeping troops who were supposed to be protecting them at a centre for internally displaced people."

A UN aid worker has been suspended for leaking the report.


The UN and the military are known to be heavily involved in child abuse.

Charity worker Paula Donovan says: "The regular sex abuse by peacekeeping personnel uncovered here and the United Nations' appalling disregard for victims are stomach-turning, but the awful truth is that this isn't uncommon."

UN staff have been linked to child abuse scandals in the Democratic Republic of Congo, Kosovo, Bosnia, Haiti, Burundi and Liberia....

The boys in the Central African Republic described how they were raped in return for food and money.

One 11-year-old boy said he was abused when he went looking for food.

A nine-year-old described being sexually abused with his friend by two French soldiers when they went to a checkpoint to look for something to eat.

In the USA and UK it the military who are said to run the top child abuse rings.
Posted by Anon at 07:00