Matthieu Ricard is a French genetecist and the son of the late Jean-François Revel (born Ricard), a French philosopher.

Matthieu has become a Buddhist monk.

Matthieu has been in New York for a week, staying at a Manhattan townhouse belonging to the daughter of billionaire investor George Soros.

Matthieu says that when he looks at the expensively decorated mansion he does not regret his life living in a simple room in a monastery.

He says: "Every time I look at these things, I feel, wow, imagine the responsibility of taking care of this place.

Back at the monastery in Nepal, he gets up each day at 4am, meditates, studies Tibetan texts and writes books.

When Matthieu was 18, his parents separated.

In 1972, aged 26, he travelled to India to study under Kangyur Rinpoche, a Tibetan Buddhist.

He remained in Darjeeling for seven years and claims that he was very happy there.

Neuroscientist Richard Davidson at the University of Wisconsin-Madison studied Matthiu and other Buddhists.

He found that compassion and meditation increased levels of happiness.

Matthiu says that just two weeks of showing kindness reduces activity in the area of the brain associated with fear. 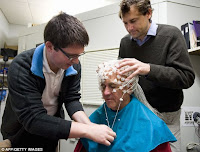 The scans showed that when meditating on compassion, there was excessive activity in Matthiu's brain's left prefrontal cortex compared to its right counterpart, giving him an abnormally large capacity for happiness and a reduced propensity towards negativity, researchers believe.

Matthieu believes that a culture greater altruism and compassion can improve the world.

He says: "individuals change culture, culture changes the individuals..." – and the next generation will change it again,’ he says.

He says: "I sometimes feel sad when sadness is the appropriate response, for a disaster in Nepal or a massacre – how can you not feel sad?

All that we are is the result of what we have thought. It is founded on our thoughts. It is made up of our thoughts.

If one speaks or acts with an evil thought, pain follows one, as the wheel follows the foot of the ox that draws the wagon.

If one speaks or acts with a pure thought, happiness follows one, like a shadow that never leaves. According to Matthieu Ricard:

We should not be a slave to negative thoughts.

We should not let negative thoughts stick to our mind.

We should cultivate qualities such as kindness.

"You can look at your experience like a fire that burns.

"Being aware of anxiety is not being anxious it is being aware."

By being aware of these emotions you are no longer adding fuel to their fire and they will burn down.

aangirfan: How sane, balanced, and happy are the people of the USA?.
Posted by Anon at 01:30