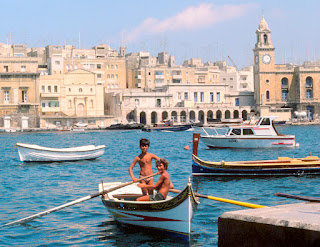 When one wants to arrive at 'the fabulous', one can fly to mysterious, magical Malta.
Malta means red and golden flags, Enid Blyton adventures, Megalithic temples and searching for treasures. 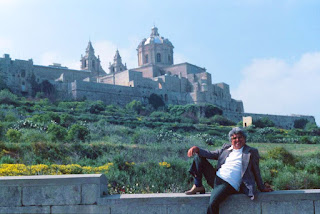 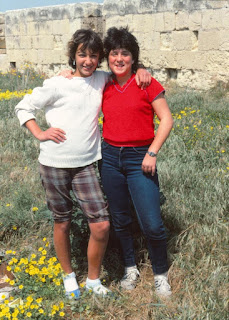 The little town of B., with its pretty bay and its oil tanks, is an eccentric a mix of seaside and industry.

Angelo and friends carried the bags into the house being rented, and pointed out both the lemon trees and the well in the garden.

The walls of the old house are a light rosy sandstone.

I opened a bottle of La Valette and settled down to some games of Zabbar Whist with some old companions. 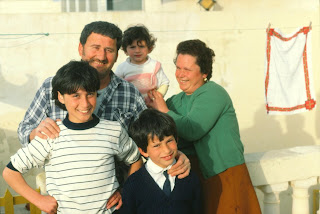 At Dingli, up among the windswept stone walls and the windpumps, the grinning Galeas showed me their farm. We dined on farm wine, and pasta with tomatoes and cheese. 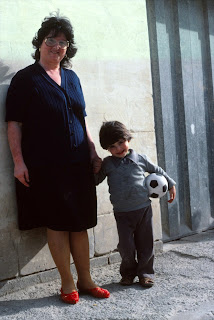 In Rose Marie's home, in a high tenement in the dark back streets of Marsa, I supped Hopleaf, admired the plastic flowers and the photos of Liverpool football team, and listened to their news. The water had been off for several days and so washing the new baby was a problem. 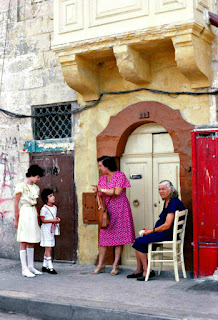 The Cassars took me to their wooden hut in a fishing harbour beneath some cliffs. Kids were diving for shells.

By the light of an oil lamp we dined off freshly caught pesce spada and local wine.

"All the money is in Swiss bank accounts," said one brother. 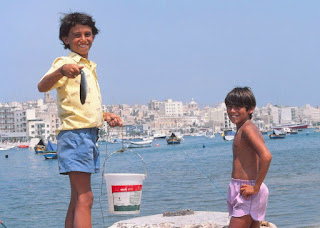 In a little flat in 'Dockland', I visited Joseph, a middle aged gentleman who 'once helped to break into the headquarters of the Nationalist Party'.

Joseph was seated on an old iron bed, beneath a picture of Christ.

Joseph had tales of alleged murders committed by supporters of a certain political party. 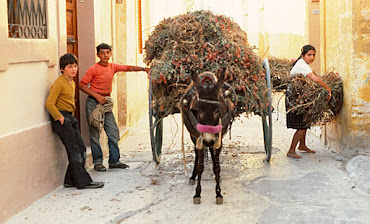 Christopher took me on a tour of his tiny, stony, somewhat fly infested farm.

I walked home laden with grapes and tomatoes. 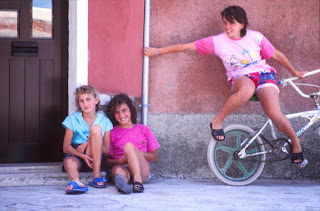 On Festa night a group of us visited the village of Ghaxaq, where the main church is dedicated to the Assumption of Santa Marija.

Packing the square, in front of the baroque church, were all the sweet little old hobbity people, with their bent backs, and all the beautiful girls in their 'Italian' dresses.
It grows dark. Suddenly she appears - Saint Mary.
Cheers are followed by wild clapping, singing and deafening fireworks, as the statue progresses through the narrow streets. 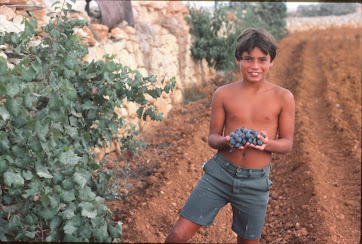 Christopher showed me his pigeons, which fly regularly from Sicily, and win lots of cups.

The cups are displayed in a room full of copies of Rococo paintings.

Christopher's son goes to a private school, but the family vote Labour.

"Labour has done a lot for the people," says Christopher.

"What about Malta's friendship with Gaddafi," I asked.

"We are an independent country," replies Christopher. 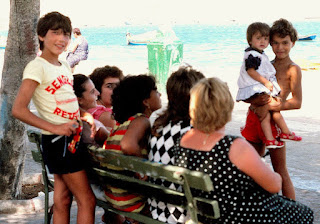 A group of us set off on a final treasure hunt - exploring an old British army camp and fields of poppies, wild orchids and butterflies.

For our picnic we had crusty bread, cheese, capers, olives, tomatoes and ginger beer.

Trips to Valetta mean seeing the Knights of Malta.

Transport is easy on Malta. 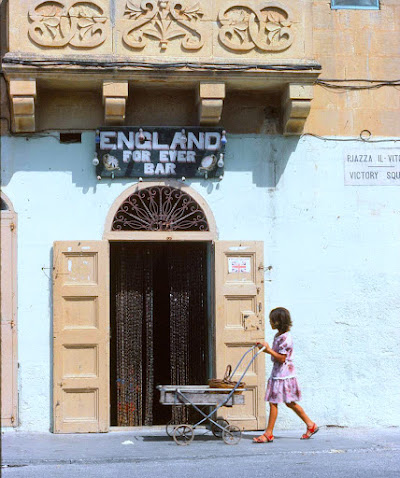 In Malta, there is music and drama wherever you look. 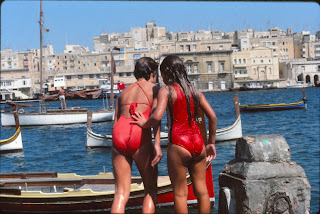 Malta has fun for all the family. 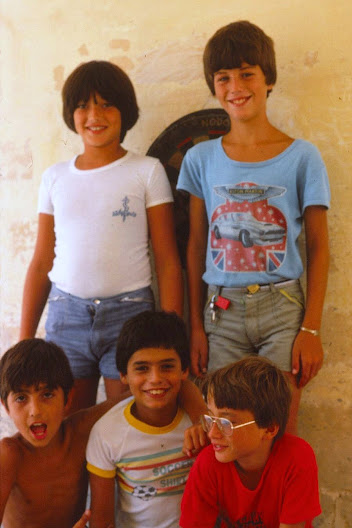 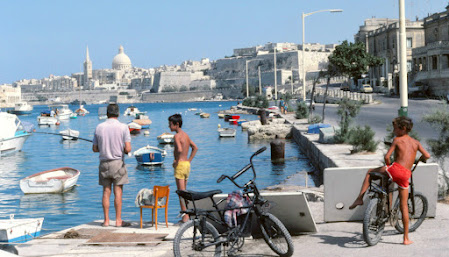