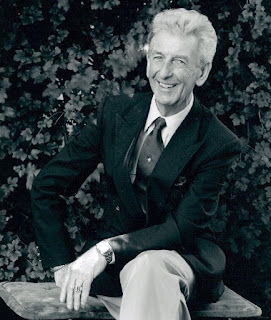 Jack believed that, in order to heal, we should tune out of our ego and tune into the higher spirit.

Jack said: 'I don’t have any abilities which the average person doesn’t have.'

Most people, he said, put more energy into their disease and injuries than they do into their healing processes.

'The healing process can only be activated if you really start paying attention to what we can do if that part of the body is functioning well.'

In 1943, Jack was captured by the Germans and sent to a forced labour camp in Germany, and later to Sachsenhaus prison camp.

At the Menninger Foundation, in the USA, Jack demonstrated the power of the mind over the body.

Jack Schwarz could push a metal shaft completely through his arm.

There would be no pain or wound.

Pain is the body’s means of warning us something is wrong.

Jack compares his method of pain control to shutting off the alarm in the morning when we have heard it enough to get the message that it’s time to get up.

Jack says 'I have never healed a single person in my life yet except myself.

'But I have been instrumental for them to start the healing process by getting them started and giving them some little bit of energy. I didn’t give it away, but I just shared it with them.'

Jacks says: 'Let us say a person is in a cast of the leg, so they cannot run, they cannot really walk very well either.

'We ask them to start imagining themselves as really experiencing, not just a mental picture, but really experiencing to be, let us say, on the beach and running and playing with the ball or going into the waves and to really perceive and to smell the sea air, to feel the warm sand on their feet - anything that can make it more real to them, so that even for a moment they forget they are actually in a chair.

'Through that, they actually activate their muscles and their blood circulation, and the instruments show that they are responding as if they really were walking or running and playing with the ball.'

JACK SCHWARZ: Mind Over Matter | Through Your Body
Posted by Anon at 00:35