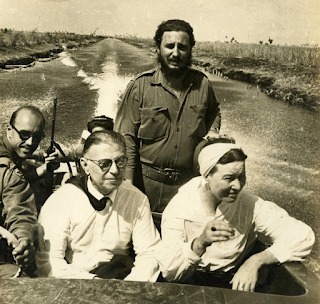 Castro, with Sartre and de Beauvoir.

The French philosopher Jean-Paul Sartre's essay Anti Semite and Jew says that anti-semitism is not grounded in facts about Judaism or the Jewish community, but in irrational thinking.


It should be noted that the 'anti-semitic alt-right' is being led by crypto-Jews.

Sartre was a fan of Israel.

Sartre believed that the Communist regimes, such as those of Stalin, had serious kindly, altruistic intentions.

The atheist Jean-Paul Sartre was the partner of the bisexual Simone de Beauvoir.

Kate Kirkpatrick, in BECOMING BEAUVOIR: A LIFE, writes that Sartre timetabled his various mistresses into his week.