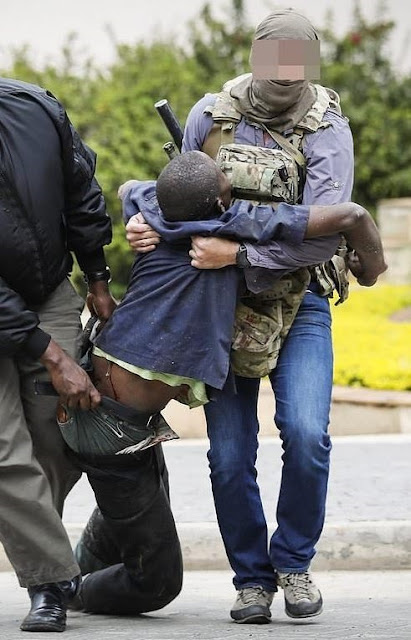 A British SAS special forces soldier removing a victim of the Kenyan hotel attack of January 2019. sas-trooper-led-charge-into-kenya-hotel The British Special Air Service soldier is wearing what appears to be US military-issued combat gear.

A member of the British SAS and an unspecified number of United States Navy SEALs, 'took part in the response to the attack.' [12] 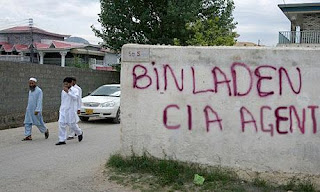 The CIA and its friends want the USA, rather than China, to control Kenya.

There is a belief that CIA and its friends control Al Shabaab and will use Al Shabaab to ensure that the USA, rather than China, controls Kenya.

Al Shabaab is linked to Al Qaeda which is reported to be run by the CIA and its friends. 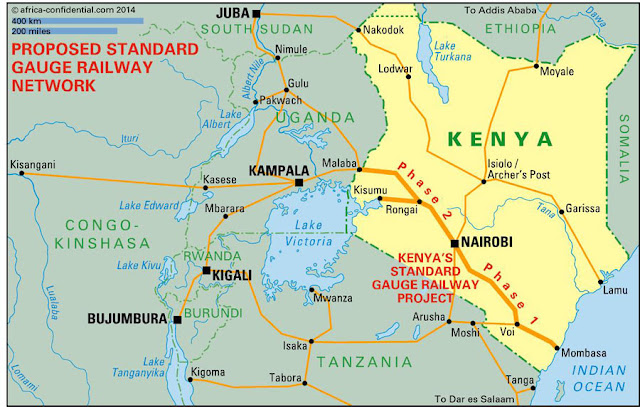 Kenya is one of China's most important African partners.

China has just finished constructing part of the railway megaproject between the largest East African port of Mombasa and Nairobi.

China hopes to extend the railway to Uganda and possibly to the mineral-rich Congo.

The port of Lamu, in Kenya, serves as the terminal point of the Chinese-envisaged LAPSSET megaproject between Kenya, South Sudan, and Ethiopia.

Lamu is within Al Shabaab’s reach.

Late in 2018, the USA openly stated its desire to challenge China all across Africa.

"It wouldn’t be surprising if US intelligence services attempt to take advantage of Al Shabaab’s weaponized version of Somali nationalism in order to steer the group towards attacking Chinese Belt & Road megaprojects that have the long-term potential of strengthening the Kenyan state.

"As the modern-day “Scramble for Africa” shows no signs of abating and is poised to become a major factor in the New Cold War, this “dark scenario” certainly can’t be precluded."

Samantha Lewthwaite is linked to the London Tube Bombings of 2005, and to a bombing campaign against tourist hotels in Kenya. Her father was a soldier in the UK military. SAMANTHA OF MI6?

Al-Shabaab has launched a series of terrorist operations in Kenya in recent years. In 2013, Al-Shabaab took over a luxury mall in Nairobi, killing 67 people.

Al-Shabaab has been opposed to Kenyan involvement in the Somali Civil War.

A member of the British SAS and an unspecified number of United States Navy SEALs, took part in the response to the attack. [12].

It was reported that 21 civilians had been killed and that five attackers were neutralized.[2]

At the Kenyan mall, the man with the gun is in the UK's Special Air Services (SAS). aangirfan: SAS IN MALL WHEN ATTACK BEGAN

25 Sep 2013 - "It is made up of (white) Kenyan Jews of European origin, some of whom have now been here for three or four generations; many Israelis - on ...

Michael Adebolajo released from Kenya, with the help of MI5? The London Woolwich 'terrorist' Michael Adebolajo is thought to have been working for MI5-MI6 for many years. When the police in Kenya arrested Michael in 2010, MI5-MI6 are said to have organised his release. Michael Adebolajo was arrested in ... / ADEBOLAJO WAS PAID BY MI6'

22 Dec 2015 - The terrorists were the CIA-Mossad's Al-Shabaab who stormed the bus in Kenya. The CIA-Mossad terrorists demanded that the Muslims and ...

British run concentration camp in Kenya. According to some historians, Britain bears “significant responsibility” since 1945 for the direct or indirect deaths of 8.6 million to 13.5 million people throughout the world from military interventions and at the hands of regimes strongly supported by Britain. (Unpeople, Dirty Wars and a Web of Deceit – Britain’s Foreign ...)
aangirfan: CIA ATTACKS MALL SHOPPERS?

23 Sep 2013 - This mall attack is partly about oil, oil pipelines, naval bases and the ... The people whoattacked the Kenyan shopping mall are described as ...

In 2011, Kenya's Raila Odinga and Israel's Benjamin Netanyahu promised to strengthen security ties. Odinga was defeated in the 2013 presidential election in Kenya.