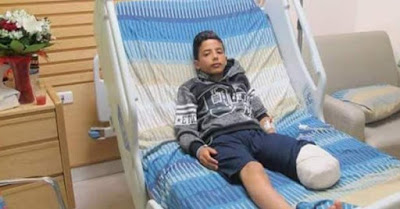 The above 12 year-old Palestinian boy, shot by an Israel army sniper, has lost his leg.

The UK Sells $445 Million of arms to Israel, including Sniper Rifles, after Israel just murdered over 25 unarmed Palestinians in cold blood with sniper rifles.

"The National Guard set up a machine gun on a hill overlooking the tent city and began raining down bullets on the workers and their families.

"The soldiers then invaded the colony and began setting fires to the tents, trapping many innocent people to die inside."

US Military Slaughtered Kids in Colorado

The World is being run by the HENRY KISSINGER's FRIENDS. 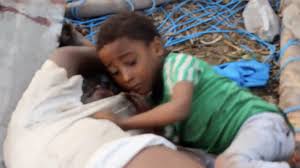 "This image taken after the Saudi-led wedding party bombing in Yemen last Sunday featured a young boy clinging to his father's dead body, refusing to leave.

"The West's mass media won’t allow this picture to circulate. It might help stop our ally's slaughter."