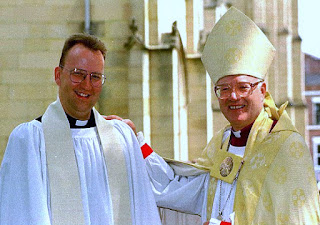 Mark Carey (left) with his father Lord Carey, who was the UK's Archbishop of Canterbury.

Mark Carey is a priest and he is the son of Lord Carey, who was the Archbishop of Canterbury.

Mark Carey was detained at his home after claims that, when he was in his late teens, he sexually abused a female child.

A Durham Police spokesman said: 'A 51-year-old man was arrested ... on suspicion of historical sexual offences. He has been bailed pending further enquiries.'

A Church of England spokesman said: 'A 51-year-old priest in the Diocese of Leeds has been suspended by the Bishop following his arrest by Durham Constabulary concerning allegations of historical abuse.' 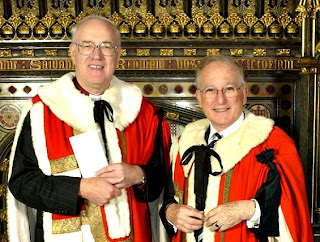 Lord Carey, previously Archbishop of Canterbury, with Greville Janner, who was alleged to be a child abuser.

In 2016 Lord Carey (George Carey) strongly criticised the Church of England for destroying the reputation of Bishop George Bell over 'unproven' abuse claims.

Lord Carey was reportedly part of a cover-up, which shielded serial sex-abuser Peter Ball (the former bishop of Lewes and Gloucester) from prosecution.[45]

Peter Ball was jailed in 2015 for sex offences. 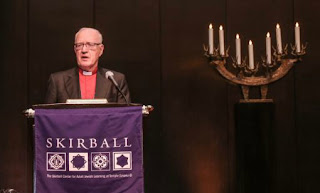 George Carey was a curate at St Mary's Islington.

Islington has been a major centre of child abuse.

In 1998 the spooky George Carey made a public call for the humane treatment of Augusto Pinochet, the former dictator of Chile, who was at the time in custody in the United Kingdom.[11][12] 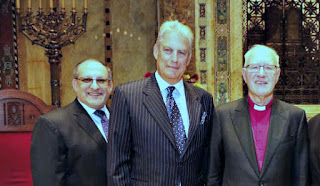 Carey supports Israel and is opposed to disinvestment in Israel companies.

In 2006, Carey declared that a church motion in favour of disinvestment in a company active in the occupied territories of Israel made him ashamed to be an Anglican.[41] 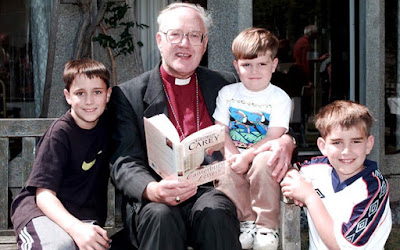 Reportedly, it was Margaret Thatcher who got George Carey appointed as Archbishop.