The philosophy of Existentialism considers that:

Human beings are free to choose: 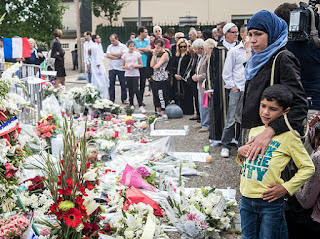 A. The world is not orderly or meaningful.

B. Human beings have no pre-existing or set nature or character.

C. Some people may be born handicapped, or Black, or White.

But everyone is free to be a good or a bad person.

Soldiers are free to disobey orders.

D. Instead of getting our code of behaviour solely from dodgy ancient gods or texts, we should look inside ourselves.

E. Each individual has to work things out for himself/herself and then lead the appropriate life.

On Being An Existentialist

Kierkegaard came to believe that, by the 19th century, Christianity had deviated from its original meaning of 'mercy, humility and loving-kindness'.

Thus, when a person engages in the act of loving, he is achieving an aspect of the divine.

When an individual does not come to a full realization of his infinite side, he is said to be in despair.


"Kierkegaard was an unhappy, neurotic, and terribly suffering man."

Where did Kierkegaard perhaps go wrong?

Kierkegaard said that you feel anxiety because you see that you and you alone are responsible for your actions.

Kirkegaard often had doubts about God.

Imagine if Kierkegaard had tuned into 'something outside himself' and become a happy nurse or doctor.

Imagine if Kierkegaard had been less obsessed with himself.

Existentialists believe that when you're born, you have no meaning and no purpose.

Existentialists believe that there is no 'morality' in the world, other than the 'morality' that individuals create from inside themselves.

In other words, morality is not part of the fabric of the world.

Many Christians, Buddhists, Taoists and Humanists would argue that there are signs of ethical behaviour in the world of nature.

Friedrich Nietzsche was an existentialist.

He believed that life is 'will to power'.

This idea has appealed to some Nazis and Zionists.

Jean-Paul Sartre was an existentialist.

"Sartre believed that since there is no God to design man, man has no blueprint, no essence.

"His essence or nature comes not from God as Creator but from his own free choice."

Albert Camus did not consider himself to be an existentialist, although his ideas seem identical to those of the Existentialists.

"In a universe suddenly divested of illusions and lights, man feels an alien, a stranger.

"His exile is without remedy since he is deprived of the memory of a lost home or the hope of a promised land."

This is the problem with most Existentialists.

They generally reject such things as Reincarnation, the Holy Spirit, the Tao and all things Serendipity.

Some people believe that our minds co-create reality.