Rudi Giuliani said there had been five major Islamist terrorist attacks on the US and its allies in the past seven months.

"You know who you are," he warned terrorists, drawing the biggest cheers of the night.

Giuliani may have been referring to terrorist attacks reportedly carried out by Mossad and the CIA.

What about the Kosher Nostra? 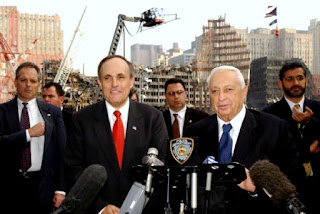 Former New York City Mayor Rudy Giuliani says that Donald Trump can keep America safe in the wake of the repeated (Gladio) attacks and (false flag) mass shootings that have made Americans 'fear for their children and fear for themselves.'

"The main companies involved in Trident are US multinational Lockheed Martin (who produce the missiles), BAE Systems, Babcock & Wilcox and Rolls-Royce – who are involved in the Successor programme – and also names like Bechtel, Honeywell,Raytheon and Serco who are contracted or subcontracted in relation to the current Trident system.

"According to the House of Lords register of interests, around 15% of sitting members are directors of, or shareholders in, companies that are either directly contracted to the Trident programme or invest in it...

"Labour’s Lord Hutton, defence secretary under Gordon Brown. He is an adviser to Bechtel, consultant for Lockheed Martin and chair of the Nuclear Industries Association (NIA).

"The revolving door (the phrase used to describe MP’s who, once finished in parliament, go into jobs related to their previous role) has never spun so quickly...

The truth about Trident: the shocking fact that would turn us all against paying for nukes

"The Royal Bank of Scotland (RBS) are financiers of the VEB bank who fund Russia’s nuclear submarines – and they also invest or part-own seven companies directly contracted to Trident...

The truth about Trident: the shocking fact that would turn us all against paying for nukes

Boris Johnson, who is a close friend of Israel and who has some Jewish blood, says: "I will be making clear my view that the suffering of the Syrian people will not end while Assad remains in power."


Several parts of Melania Trump’s speech were similar to words that Mrs Obama used in an address at the Democratic convention in 2008.

Some phrases - including “you work hard for what you want in life, that your word is your bond and you do what you say” - were identical.