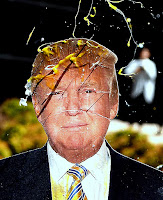 Joseph Schmitz arranged for weapons to be sent to al Qaeda linked rebels in Syria.

On 24 August 2016 we read that Turkish tanks have rolled into Syria with US Air Support.

This means that the USA most likely did not try to topple Erdogan in the 'coup' of 15 July 2016?
The New Atlas has an article entitled Turkey Invades Northern Syria - Truth of Turkish "Coup" Revealed?

Turkey has reportedly annexed the Syrian city of Jarabulus.

Jarablus: Turkish tanks roll into northern Syria.
The USA and its allies want to set up bases inside Northern Syria.

British special forces are reportedly in southern Syrian attempting to set up a base.
Turkey
The US plan is to break up Syria, using ISIS, al Qaeda, Turkish forces, various special forces and various child murdering rebel groups. 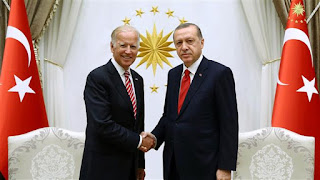 "Turkey is fighting the Kurds under the excuse of combatting ISIS," according to the Kurds.

Reportedly ISIS had already left Jarabulus some time ago.

Apparently, the USA prefers the Turks to the Kurds?

The 'US won't prioritize the Kurds over its alliance with Ankara ... 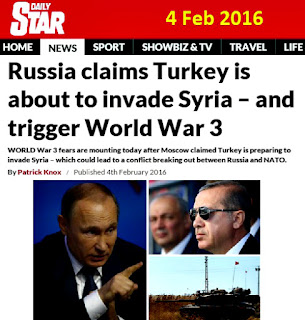 There have been predictions of a World War.

Russia says it is worried by Turkey's invasion of Syria.
Russia concerned over Turkish entry into Syria.

Have deals been done behind the scenes?

Trump praises Erdogan for coup crackdown.
Below, is what we wrote earlier about the coup: 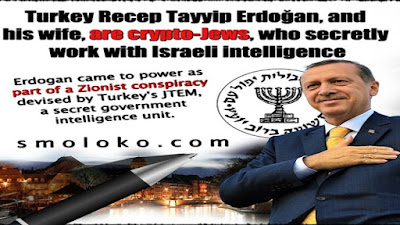 The Erdogan government had already prepared the list of 3,000 names to arrest before the fake coup took place in July 2016. 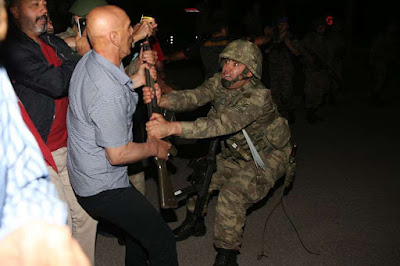 Israel may have helped Erdogan to stage a fake coup.

The coup may have been designed to fail.

Turkey is working with Israel against terror, Erdogan says. 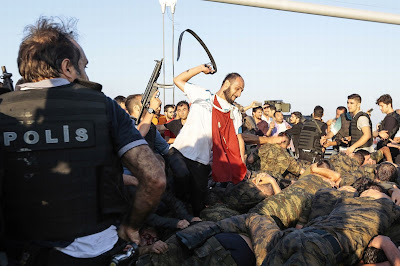 If there had been a real coup, the plotters would have announced to the world that President Erdogan had been:

"Cosying up to Israel,

"Peddling ISIS's stolen oil in partnership with his son and Barzani, the Kurdish strongman..." 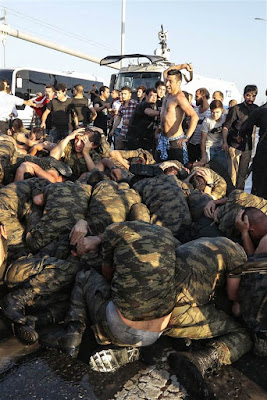 The 'fake' coup has allowed Erdogan to arrest more of his opponents.

2,745 judges across Turkey, viewed as opposed to Erdogan, have been dismissed.

Brabantian alerts us to the following:

"The planning, organization and implementation of the attempted military overthrow were suspect at best and outright laughable at worst.

"According to Hurriyet newspaper online, some of the privates who were detained told interrogators they were not aware that they were part of a coup attempt ...

"They had been told by commanders they were taking part in military maneuvers ...

"It was 'coup soldiers' who helped to gather Istanbul 'people's midnight uprising' at which Turkish flags mysteriously appeared.

"1000 or so people were out of their cars, with nowhere to really go except Taskim Square, where they were promptly handed hundreds of Turkish flags of identical size and shape on identically sized poles." 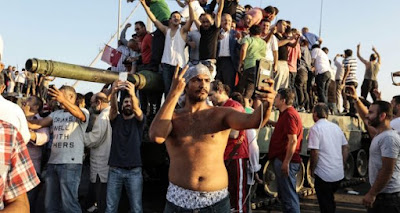 Sovereigntea alerts us to the following:

"Media organisations such as Dogan, Hurriyet and others were still operating and putting out pro-Erdogan information, including updating their websites, long after they were supposedly seized by the coup plotters.

"Gordon and I were monitoring the Turkish news websites while all this drama was being played out; they continued to operate and the tone of their coverage did not alter one iota – it remained steadfastly pro-Erdogan.

"This was a very strange coup, there were no apparent leaders, no-one came forward to make statements to the public or to try to garner support.

"We have noted Erdogan’s role in:

"Aiding in the terror attacks in France along with his partners Israel and Saudi Arabia, perhaps even the Nice attack itself, we aren’t sure yet, but ALL of the others."

On 15 July 2016, a coup d'état attempt in Turkey was launched by a group within the Turkish military.

In June 2016, Turkey finalized a deal with Israel to normalize relations.

Certain Turks are believed to have helped the Powers-That-Be to carry out the attacks of 9 11.

There is a belief that the powers-That-Be want to use Erdogan to weaken and break up Turkey. 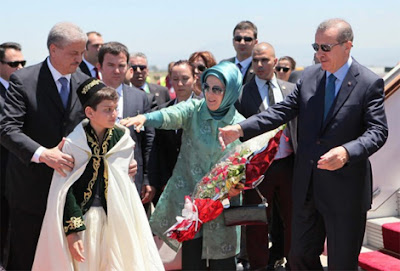 
11 Aug 2014 - Erdogan supported Israel becoming a member of the OECD, the Organization for Economic Cooperation and Development. Erdogan's ...