In Japan, cases of reported child abuse have quadrupled in 10 years and increased 40 fold in twenty years.

In 2010, the 14th Japanese National Fertility Survey found that:

Singles between the ages of 18-34 who are not involved in a romantic relationship and do not want one amounted to 28% for men and 23% for women.

In 2010, a survey published in The Japanese Association for Sex Education Research Journal found that 40.8% of marriages in Japan could be classified as "sexless". 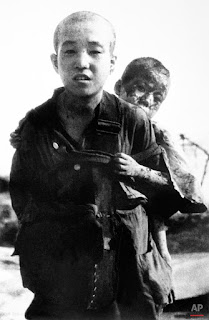 AP WAS THERE: US Drops Atomic bomb

36.1% of males and 58.5% of female respondents aged 16 to 19 surveyed described themselves as 'indifferent or averse' towards having sex.

It was also reported that 83.7% of men who turned 20 that year were not dating anyone, with 49.3% stating they had never had a girlfriend.

59% of female respondents of the same age group responded similarly, a 12% increase from the 2008 survey.[5]

A 2005 Sex Survey of 317,000 people in 41 countries conducted by Durex, the largest condom manufacturer in the world, found that the Japanese had the least sex in the world

In January 2016, Japan and the United States signed an agreement under which Tokyo will maintain the budget to host U.S. forces over the next five years.