In 1967, police raided the home of Rolling Stones guitarist Keith Richards, arresting him and Mick Jagger for drugs offences.

In his book, The Ultimate Evil, Maury Terry wrote that between 1966 and 1967, the (CIA-linked) Satanic cult called the Process Church, "sought to recruit the Rolling Stones."

'Kenneth Anger' (right)
Jagger has been influenced by Kenneth Anger, a follower of Aleister Crowley.
Crowley worked for the UK spy service MI5.
(Aleister Crowley Was A British Intel Agent - Rense)
Author Tony Sanchez wrote that Mick Jagger "listened spellbound as Anger turned them on to Crowley's powers and ideas."
(Tony Sanchez, Up and Down WIth the Rolling Stones, p.155)

Chris Jagger (left) with father and Mick.
Chris Jagger, brother of Mick 'was originally to take the role of Lucifer'.
Then it was decided that Lucifer would be played played by Bobby Beausoleil, a member of the Manson Family, and Anger's homosexual lover.

Beausoleil (above) committed the first of the Manson family's series of murders.

Process Church follower Marianne Faithfull went to Egypt to take part in the film's depiction of a Black Mass.

She became the lover of three members of the Rolling Stones.

Anger said of Anita, said, "I believe that Anita is, for want of a better word, a witch...The occult unit within the Stones was Keith and Anita...and Brian. You see, Brian was a witch too."

Tony Sanchez wrote of Pallenberg in his book, Up and Down with the Rolling Stones, "She was obsessed with black magic."

Keith Richard's house was located near the East Coast headquarters of the Process Church.

According to an article in the English newspaper Midnite, a Connecticut police officer, Michael Passaro, who had responed to the "suicide'' reported "strange singing" from the woods a quarter mile from the Richard's mansion.

According to the newspaper, "There have been several bizarre satanic rituals in the area over the past five years."

In 1967, the Rolling Stones released Their Satanic Majesties Request.

Mick Jagger was considered for the leading roll in the film of Anthony Burgess's novel, A Clockwork Orange.

Burgess reportedly worked for the security services and took an interest in mind control.

Anthony Burgess wrote Honey for the Bears, which reportedly is about CIA-funded mind control experiments, of the sort carried out by Dr Ewen Cameron from 1957-63.

BATMAN AND THE CIA

At one point Jagger owned the rights to the Burgess novel Clockwork orange.

It has been alleged that the death of Meredith Hunter, which took place during a Stones concert, just outside San Francisco, was a human sacrifice.

It has been alleged that the audience were whipped into a frenzy, in open praise of the Devil.

Mick Jagger played the part of Lucifer in one of the bands songs.

By the end of the concert, four people were dead and dozens left beaten and injured.

The death of Meredith Hunter

Tony Sanchez, in Up and Down with the Rolling Stones, describes the 'satanic ritual'.

"Several of the kids were stripping off their clothes and crawling to the stage as if it were a high altar, there to offer themselves as victims for the boots and pool cues of the Hells Angels." 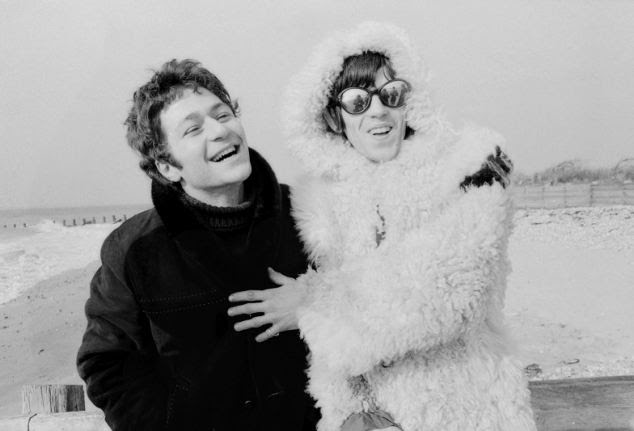 Mick Jagger's first link to LSD seems to have been David Snyderman, 'a CIA operative'.

According to Alex Constantine: "A CIA operative arrived in the lives of the Stones.

"He claimed to be a James Bond figure and he turned up with a valise full of every drug you can imagine.

"At this point the Stones still hadn't done LSD.

"They woke up one morning at the home of Keith Richards and here was this character slipping LSD into their tongues as they were waking up."

Why did the Rolling Stones's pal David Sniderman/Schneidermann have "a whole collection of different passports in different names and with different nationalities on them."

(Michael Cooper quoted in Tony Sanchez's book - Up and Down with the Rolling Stones.)

Ken Kesey took part in a study of LSD, as part of the CIA's Project MKULTRA, at the Menlo Park Veterans Hospital.

The CIA and British intelligence carried out experimentation with LSD, in the early sixties, in the Haight-Ashbury district of San Francisco.

The project was "run under the code-name MK-Ultra."

One of the people involved in the distribution of free LSD tablets to an unsuspecting public was the CIA-linked Ken Kesey.

THE SATANIC ROOTS OF ROCK

Sir Mick Jagger and Sir Jimmy Savile are both linked to the spooks and to boys.

LSD can lead to a person becoming mentally ill and dangerous.

MK-Ultra mind-control operations involve the use of drugs and Satanism.

Charles Manson is believed to have been a victim of the CIA's MK ULTRA brainwashing.