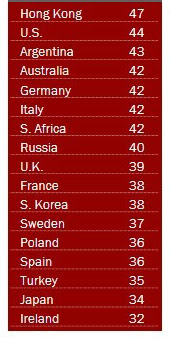 Above we see the % of the population in various countries who trust their government and institutions.

"The 2015 Edelman Trust Barometer reveals an alarming evaporation of trust across all institutions...

"Trust in government, business, media and NGOs in the general population is below 50 percent in two-thirds of countries, including the U.S., U.K., Germany and Japan." 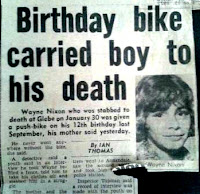 1. Politicians, such as Bill Clinton and Edward Heath and Bob Hawke, were once trusted by large sections of the population.

Clay Shaw, who was reportedly acquainted with Stephen Ward, one of whose girls was Mariella Novotny.

There was the story about Mariella Novotny playing a sex game, called 'nurse and patient', with John F Kennedy.

Mariella, whose real name was Stella Capes, spoke Hebrew, and she was suspected of being a tool of the security services.

Lord Denning, and his secretrary Thomas Critchley, suspected that Satanic rituals were being performed in the London home of Mariella and her husband Hod.

Stephen Ward, who was part of Mariella's set, 'was employed by MI5'.

In January 1963, Phillip Graham, the owner of the Washington Post, disclosed to a meeting of newspaper editors that John F. Kennedy was having an affair with Mary Pinchot Meyer.

JFK, THE MAN IN THE MASK.

3. At the start of World War II there was certain amount of trust in the UK government and in the UK media.

However, as the war progressed, some citizens began to realise that the government and media were telling lies about almost everything from casualty figures to the state of morale.

When the Royal Airforce continually killed masses of civilians, this information was kept hidden from most of the public.

The public were not supposed to know that Churchill, in 1932, had considered forming an alliance with Hitler.

The public were not supposed to know that, according to Anthony Blunt, the death in 1941 of the king's brother, the Duke of Kent, was a murder on Churchill's orders.

The public were not supposed to know that many of the top people in Britain were fans of Hitler.

4. The Royal Bank of Scotland (RBS) was once run by trusted gentlemen.

In 2008, RBS had to be rescued from bankruptcy.

There is now less trust in banks. 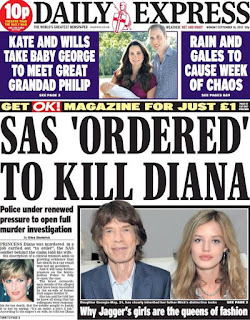 5. The UK's Special Air Service (SAS) has been much trusted.

However, it has been reported that the SAS (Special Air Service) trained the Khmer Rouge. 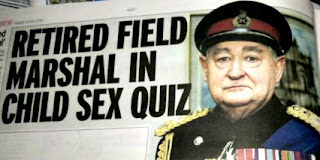 In the case of Cyprus, the US government wanted to hold onto its spy bases on the island. 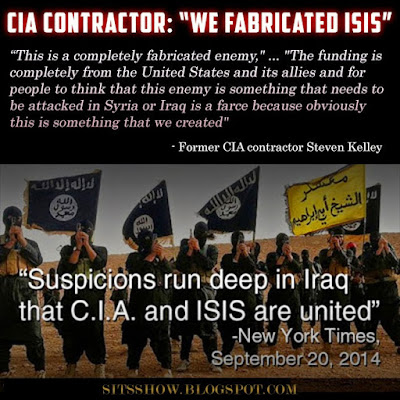 6. The US military has been much trusted by the American public.

But, it has now been revealed that the US military has used Islamists to fight its battles.

A child victim of the CIA's MK ULTRA. The MK ULTRA scientists, working in around 80 institutions, included Nazi war criminals.

It is believed that the BBC's Sir Jimmy Savile was an agent of the security services.

1982 - Johnny Gosch was kidnapped, reportedly by the US military. Noreen Gosch gave the court sworn testimony linking U.S. Army Lt. Col. Michael Aquino (ret.) to the nationwide pedophile ring that kidnapped her son. Noreen Gosch said: "This ... was an offshoot of ... the MK-Ultra program developed in the 1950s by the CIA."

Paul Bonacci in front of the ranch where "Johnny Gosch, and other boys were held captive." Paul Bonacci has stated that, as a youth, he was forced to participate in satanic snuff films. He identified Bohemian Grove as the location of a satanic murder. Paul Bonacci said that, as a child, he was kidnapped by the US military, tortured and subjected to sex abuse and mind control. In a court in Omaha, he won $1,000,000 in damages.

Prince Bernhard of the Netherlands was the first president of the Bilderberg Group. "As a child, Regina Louf visited his yacht Jumbo VI." Regina Louf was one of the child victims of the Dutroux pedophile gang.

Manuel Schadwald who went missing in 1993. Reportedly, a top politician from Holland was present when a young boy was murdered. Reportedly there are photos of the top politician, in the nude, with the boy. picture of naked SG of Justice ."Marcel Vervloesem confirmed what earlier sources already reported: Joris Demmink attended the satanic lust murder of the German boy Manuel Schadwald." 'DEMMINK BIJ MOORD OP MANUEL SCHADWALD- Translate this page

Derek Laud, who allegedly he pimped his classmates to wealthy and influential adults while still at school. Scallywag alleged that Laud was a sadist, who was particularly violent and without mercy in his treatment of boys. The magazine alleged that on regular occasions his victims would end up in casualty wards. He was a leading political fixer and adviser to Margaret Thatcher and he is friend of David Cameron.

Jerry Sandusky was once trusted.

In Belgium, Member of Parliament Laurent Louis publicised a list of names that an 'anonymous' group sent to all parliamentarians in Belgium. The list was "of all the people involved in the Dutroux affair." Among the names listed: US General Michael Aquino (role in military psychological warfare; involved in "Monarch" brainwashing; Councillor for Western Europe Chiefs of Staff) Paul Bonacci, victim of Monarch brainwashing, Willy Claes Secretary General of NATO in 1994 and 95, Elio di Rupo formerly Belgian Prime Minister, André Cools , assassinated Belgian government minister

1998, Famous UK footballer Justin Fashanu (above) is found hanged in a deserted lock-up garage, in Shoreditch, London. 'He gave us the names of two cabinet ministers he claimed he had sex with,' says Phil Taylor, the People's reporter who negotiated with Fashanu."Stephen Milligan MP & Justin Fashanu Murders".

Brad Lane with Reggie Kray at Gartree prison. (Yorkshire Post) Reggie Kray was a UK gangster who provided boys for top people. In 1969, he was jailed for murder. Reggie Kray's prison file, seen by the Daily Mail, shows he spent hours talking to young offenders and writing to schoolchildren (The Goodfather: How Reggie Kray spent his later years) Gartree, a prison in the UK, has had a lot of prisoner 'suicides'.(Murder behind bars and other inmate deaths at jail ...) Brad lane died young.

Massive child abuse and child murder on the island of Jersey.  "I'VE BEEN BAD FOR YEARS AND YEARS".

Stieg Larsson, a Swedish journalist, wrote the Millennium Trilogy of crime novels. Stieg Larsson (and crime writer Henning Mankell) believed that there were links between the Swedish security services and the extreme right wing and child sex traffickers. (The dark side of Swedish society) In 2004, aged 50, Larsson died in rather mysteriously circumstances, on the anniversary of Kristallnacht. He had received death threats.

In Connecticut, Linda Wiegand reportedly came up against a "Satanic cult of pedophiles consisting of judges, attorneys, social workers and ... her ex-husband, Tom Wilkinson, who now has custody of the children." An article by Kris Millegan, dated 1 November 2001 and entitled THE PEDOPHILE NETWORK IN CONNECTICUT, suggests "that there is a pedophile conspiracy reaching up to the top levels of government." LINDA WIEGAND, A PEDOPHILE CONSPIRACY?