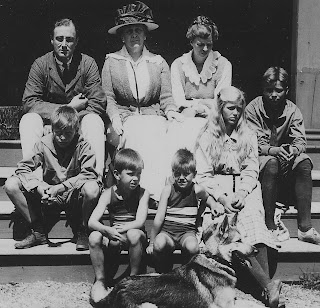 In 1940, Anna Wolkoff was part of a 'fascist group', the Right Club in London, which had discovered documents showing that Roosevelt (above) had long planned to enter World War II on the side of Britain.

There is a belief that a certain cabal planned World War II as a way of making lots of money.

An MI5 report in 1940 claimed that Anna Wolkoff recruited Princess Marina Dmitri, known as Mira, the wife of Prince Dmitri, the nephew of Czar Nicholas II.

MI5 files suggest that Mira had an affair with the Duke of Kent, a fan of the Nazis, and gave birth to his love-child Nadejda Dmitrievna in July 1933.

(Rendezvous At The Russian Tea Rooms by Paul Willetts - dailymail.)

Maxwell Knight (above) was the top man in Britain's spy service MI5 responsible for watching the 'fascists' within the Right Club.

However, publicly he opposed homosexuality.

Publicly he was anti-semitic.

But he is linked to Lord Victor Rothschild

The fifth-column scheme was headed by MI5's Lord Victor Rothschild.

He was the Director of Intelligence of the British Fascists from 1924 to 1927.

He became Deputy Chief of Staff of the British Fascists.

Maxwell Knight presented a BBC radio nature programme for children and was known as Uncle Max.

He used to invite young fans to visit the 'bug room' at his home in Surrey.

On leaving the Navy in 1918, Knight became a Latin teacher in London.

In 1925 he met Vernon Kell, the head of MI5, who eventually recruited him as an agent.

In 1934 Gwladys reportedly took an overdose of barbiturates, at the Overseas Club, and died.

There were rumours that Knight had murdered Gwladys.

However, his sexual interest was in the men who came to his house.

Knight recruited Joan Miller (above) as an agent of MI5.

When Joan's kitten fell ill, Knight shot it with his revolver.

Knight befriended a young male motor mechanic and spent hours with him in the shed.

When both Lois and Joan had left Knight, he married Susi.

In the doctrine of Aleister Crowley from 'MAGICK in Theory and Practice', Crowley wrote:

"The bloody sacrifice, though more dangerous, is more efficacious; and for nearly all purposes human sacrifice is the best.

"The animal should therefore be killed within the Circle, or the Triangle, as the case may be, so that its energy cannot escape...