James's mother, the Catholic Mary Queen of Scots, was married to Lord Darnley.

But the baby born to Mary in 1566 may have been the child of the Earl of Bothwell.

And, the baby may have died at birth.

The skeleton of a baby was found within the walls of Edinburgh Castle in the 18th century.

According to some people, James died at birth and was replaced by a child of Erskine, Lord of Mar.

Lord Darnley was murdered in an explosion in 1567. Mary then married, in 1567, the Earl of Bothwell. 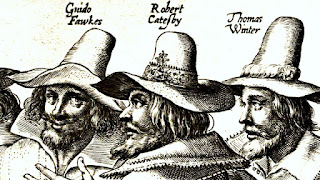 ..
Robert Catesby was among those who were secretly working for Lord Cecil who devised the Gunpowder Plot.

James became King of England in 1603.

In 1605, the King's spymaster Lord Cecil devised the false flag operation known as the Gunpowder Plot.

The purpose of the plot was to discredit Catholics, frighten King James, and allow the elite to continue to take lands and money from the Catholics.

(In 1603, Lord Cecil's brother-in-law was implicated in a plot to remove James from the throne and replace him with his first cousin Lady Arbella Stuart.)

King James I (and VI) had a number of male lovers, including George Villiers, 1st Duke of Buckingham.

Buckingham may have murdered James, in 1625.

In the 'murder plot', Buckingham may have had the assistance of James's son Charles, who became Charles I.

James was aged 58 when he died unexpectedly.

James is believed to have had a gastric problem.

Buckingham sent his own doctor to treat James and the James's condition then deteriorated rapidly.

James had a stroke, and his tongue became so swollen as almost to cause suffocation.

Immediately, the rumour began to spread that Buckingham had poisoned James. 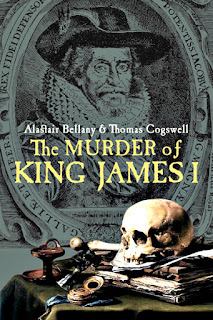 A year after the death of James I, a pamphlet accused the Duke of Buckingham of murdering King James.

Two leading scholars, Alastair Bellany and Thomas Cogswell, have written about how the alleged poisoning helped to make King Charles I unpopular.

The Murder of King James I.

Buckingham and James's son Charles were part of a powerful faction within the elite.

In 1623, Charles and Buckingham went to Spain to woo Maria, the daughter of Philip III.

Maria said she would rather go into a nunnery than marry Charles.

Buckingham and Charles having fallen out with Spain, wanted a war with Spain.

But, James refused to declare war. 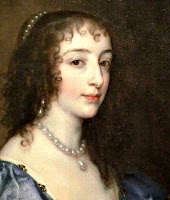 Charles and Buckingham arranged a marriage alliance with France which was Spain's enemy.

In 1625, Charles married the 15-year-old Henrietta Maria, the daughter of King Henry IV of France and Marie de Medici.

The pamphlet accusing Buckingham and Charles of murder was written by a Scot, Dr. George Eglisham.

Eglisham, a Catholic, had grown up in the circle of James Hamilton, later the second Marquis of Hamilton.

The second Marquis of Hamilton preferred Spain to France.