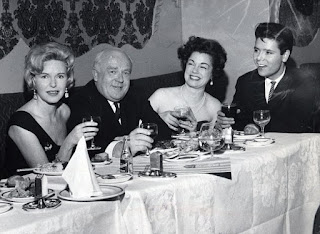 Ronnie Cornwell (father of  the UK spy John le Carré, aka David Cornwall) with Cliff Richard (right) at the Hungaria Club, Maidenhead. Both Ronnie Cornwall and Cliff Richard have been linked to the Kray Twins. dailymail

John le Carre (David Cornwall), in his memoir The Pigeon Tunnel: Stories from My Life, to be published in 2016, reveals that his father, Ronnie Cornwell, was a child abuser.

Cliff Richard with Winston Churchill's close friend Lord Boothby, who reportedly was supplied with boys by the Kray Twins.

Ronnie's father, Frank, was 'a staunch Baptist' and former mayor of Poole.

Ronnie was married to Olive whose family were 'narrow, strict and teetotal'.

When David was five years old, Olive eloped with a business associate of Ronnie's.

Ronnie then started a relationship with Jean Gronow, who worked for the BBC.

Ronnie was a friend of the Kray Twins, gangsters who supplied boys to members of the elite.

Charlie Kray had a photo of Ronnie with an arm around each of the Kray Twins.

The enemy agent turns out to be Bill Haydon, a respected colleague.

John le Carré (David Cornwall) , the author of Tinker, Tailor, Soldier, Spy, was himself a spy.

His father (Ronnie) was a con man.

Le Carre says of his father Ronnie: "He was a con man, a fraudster.

"He served four years for fraud, several of them in Wormwood Scrubs..."

The Kray Twins (TOP UK PEDOPHILE RINGS). In 1999, the (London) Daily Mail pointed out that the gangster Kray twins, Ronnie and Reggie, were "of Jewish... stock."

According to Le Carre (David Cornwall):

"Mrs Kray showed her the family album and there was a photograph of our father with his arms around the Kray twins."

It is said that le Carré modeled the character of George Smiley on Sir Maurice Oldfield, a former head of British Intelligence, who physically resembled Smiley.

Le Carré and actor Alec Guinness lunched with Oldfield when Guinness was researching the role of Smiley, and several of Oldfield's mannerisms of dress and behaviour were adopted by the actor for his performance.

Kincora's Boys Home, in Northern Ireland, was reportedly used as a boy brothel by the UK security services. 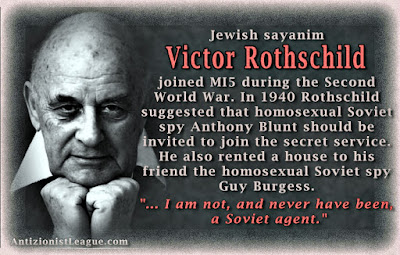 Who was enemy agent Bill Haydon?

Bill Haydon is recruited as a spy while he is a student at Oxford University.

Haydon is apparently in love with fellow student Jim Prideaux.

Haydon's bisexuality is referred to in the novel.

Top British spies who were reportedly enemy agents include:

There is a theory that all the top spies work for a certain Jewish and fascist elite.

(Our kind of Traitor by John le Carré.)

Are there traitors within the security services?

"Investigators in the United States claimed Rich's company was dealing with Iran during the US hostage crisis... They also believed he was dealing with other rogue states, including North Korea and Colonel Gaddafi's Libya. 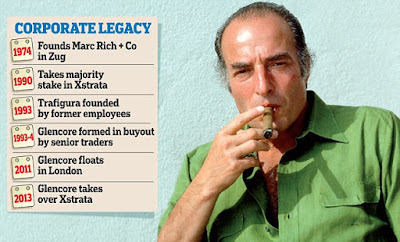 Marc Rich (Marc Reich), a Jew originally from Belgium, fled the United States in 1983 to live in Switzerland while being prosecuted on charges of tax evasion and illegally making oil deals with Iran during the hostage crisis.

"Marc Rich, the most-wanted fugitive pardoned by former PresidentClinton, was a key figure in the Communist Party and the KGB's creation of an underground government that survived the break-up of the Soviet Union and still rules Russia today behind the scenes."
Posted by Anon at 00:36