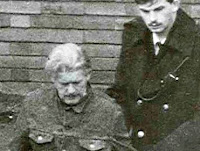 Sydney Cooke, whose pedophile ring has been linked to former UK government minister Sir Leon Brittan, who was once the minister responsible for MI5.

Sidney Cooke, who was part of a murderous child abuse gang in the UK, was reportedly protected by the police and the security services.

The murders of at least 9 boys have been linked to Cooke's gang.
Sydney Cooke reportedly supplied young boys to the elite.

FIELD MARSHALL BRAMALL; VISHAL
Cooke was mentioned at least EIGHT times in a police report, but, the police report was censored.
Sidney Cooke's links to murder of Vishal Mehrotra.

Last week, the UK police refused to say if Cooke had been questioned about Vishal.