"Jersey police are investigating 13 prominent people as part of a new inquiry into child abuse." 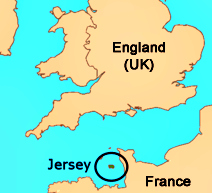 "This follows an increase in the number of people reporting historical abuse in the wake of the Jimmy Saville scandal and the Jersey Care Inquiry."

A number of famous people have visited Jersey, and none of them are necessarily linked to child abuse on the island.

Famous people who have visited Jersey, or who have lived on Jersey, include:

1. Sir Jimmy Saville (BBC personality and supplier of boys and girls to the elite)

3. The Kray Twins (suppliers of boys to the elite)

Sir Cliff Richard on the island of Jersey.

Ian Cameron had helped to run a multi-million pound investment fund on Jersey.

"Six witnesses have told police they were abused at the site, where there is a network of underground bunkers.

"Police excavated four secret underground chambers at the site, referred to as punishment rooms by some victims, and found shackles, a large bloodstained bath and children's teeth.

"The underground bunkers are less than a mile from the former children's home Haut de la Garenne."

Haut de la Garenne. "The expert in the UK who had examined the first bones we sent (which included a piece of child's tibia) said that they were very likely the bones of a juvenile human, they had been burnt shortly after death and buried shortly after burning."

Dianne Maloney, 49, from London, may have been murdered, because of her connections to Jersey child abuse.

Her brother, Bill Maloney, 52, has presented evidence to an inquest that Dianne was murdered, as a result of his investigation into child abuse in children's homes.

The Jersey child abuse scandal is reported to involve the Zandvoort network.

THE ZANDVOORT NETWORK reportedly links to 'Coral', Dutroux, Satanism and the security services.

Eileen Fairweather at the The Mail on Sunday has an excellent news story entitled 'I have known about Jersey paedophiles for 15 years,' says award-winning journalist.

Eileen Fairweather describes the links between child abuse in Islington in London and child abuse on the islands of Jersey and Guernsey.

She also suggests possible cover-ups by top police and politicians.

Police announced on 25 February 2008 that they were investigating claims that the Jersey case was linked to abuse at the Children’s Cottage Home in Portsmouth.

Fort Monckton, near Portsmouth is reportedly used for the training of MI6 recruits