UNGER ON OBAMA AND THE WORLD

Roberto Unger is a 'Brazilian' philosopher whose theories are an alternative to neo-liberalism, Marxism and social democracy.

He believes that 'the market', the state, property rights, liberal democracy and 'wage labour' are all human inventions rather than something 'natural'.

He was one of the founding members of the Brazilian Democratic Movement Party, which is linked to the feudal oligarch Jose Sarney.

Roberto Unger's German-born father, Artur Unger, arrived in the United States as a child, and became a naturalized citizen and a successful lawyer.

When he was 11, his father died and Unger and his mother moved back to Brazil.

He was then admitted to Harvard Law School and later taught there.

One of Unger's students was Barack Obama. 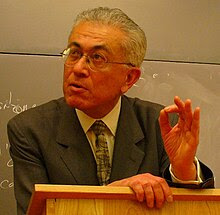 Unger argues that we are free to choose and to create the forms that our societies will take.

Unger looks at how people create wealth to pay for violence, and employ violence to garner wealth.

In the above video, Unger suggests key policies to deal with the current economic situation:

1. Banks should be in the service of the people who produce goods and services.

Governments should tax and regulate the banks that do not contribute to production.

Support cooperation between government and firms.

Support cooperation and competition among firms.

Unger receiving a medal of honor on Army Day 2008 from President Lula for his work in formulating Brazil's National Defense Strategy.

Unger states that there are only two models for a national economy available to us today:

A. The US model where BIG business controls the government

B. The model where BIG government bureaucrats control the economy.

This means an economy encouraging small business development and innovation that would create large scale self-employment and cooperation.

The emphasis is not on the protection of big business, but the highly mobile and innovative small firm.

Unger wants ordinary people to be involved in public services and care.

This would entail empowering each individual to have two responsibilities, one in the productive economy and one in the caring economy.

When it comes to politics, Unger wants:

1. The public financing of campaigns, rather than campaigns financed by oligarchs.

3. The party in power to find it easier to push through proposals and reforms.

And the opposition parties to find it easier to dissolve the government and call for immediate elections.

4. Any segment of society to be able to opt out of the political process and to propose alternative solutions for its own governance.

5. The state to have the power to rescue oppressed groups that are unable to liberate themselves.

6.  People to be directly involved in their local and national affairs.

According to Unger - while institutions do exist and shape our beings and our interactions, we can change both their structure and the extent to which they imprison us.[64][66][67]

A new moment in religion will begin, Unger argues, when we stop telling ourselves that all will be fine and we begin to face the incorrigible flaws in human existence.[8][64]

Unger would appear to be an atheist. 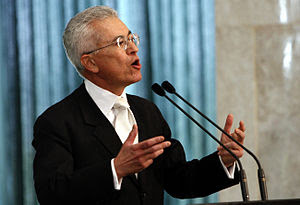 In 1983, the governor of Rio de Janeiro appointed Unger to head the State Foundation for the Education of Minors (FEEM), a state-run foundation for homeless children.

During his year-long tenure, he opened the door to international adoption and reintegrating children with their families.

He also set up community organizations in the slums to help support families in order to prevent the abandonment of children.[83] 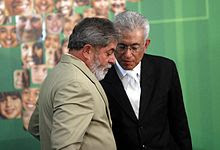 Unger wrote articles calling the government of President Lula "the most corrupt of Brazil's history" and called for his impeachment.[89]

Lula then appointed Unger as head of  the Ministry of Strategic Affairs.[90]

He supported the expansion of credit to smaller producers and a decentralized network of technical support centres that would help broaden the middle class from below.[91]

Unger worked with unions to write new labour laws designed to protect and organize temporary workers, subcontractors, and those working in the informal economy.[96]

They floated proposals such as guaranteeing every citizen "social rights" (e.g. education and a job), breaking up media oligopolies, and holding town meetings to help citizens supervise municipal spending.

Their meetings resulted in a document entitled the "Buenos Aires Consensus" in 1997, which Castaneda called "the end of neoliberalism; of the Washington Consensus."[103][104]

This consensus was formally signed in 2003 by Argentinian President Néstor Kirchner and Brazilian President Lula da Silva.[105]
Posted by Anon at 04:36