ISRAEL AND ITS MAD MOSLEMS

Here we see a child working for ISIS, which works on behalf of Israel.

Israel would like to use ISIS as a tool to get the anti-ISIS Arabs to ally with Israel.

According to Peres, 'Arab terrorism', not 'Israel', is the main threat to most Arabs.

Peres is hoping that Arab states, faced with constant disruption, will make peace with Israel.

According to Peres: "One country falls after another country.

"There is a real need to construct a different Middle East...

"The Kurds ... have established their own state. It's a matter of fact."

Peres denounced the the Fatah-Hamas Palestinian unity government as "wrong".

ISIS "is led by Abu Bakr al-Baghdadi on behalf of Prince Abdul Rahman al-Faisal ... related to the Saudi ambassador in Washington.

The problem is that most of the 'Moslem' terrorists, from Osama bin laden to David Headley, turn out to be secretly working for Israel and its friends in the USA and NATO.

The new face of the Middle East - Mossad's al-Qaeda mercenaries.
Aangirfan believes that Syria, Egypt and Tunisia WERE making good progress before the outbreak of the CIA-Mossad-MI6's Arab Spring.
A. Under Ben Ali, Tunisia was a huge success story, with a fast growing economy, and, an easy going liberal way of life.
aangirfan: TUNISIA LEAST CORRUPT IN NORTH AFRICA 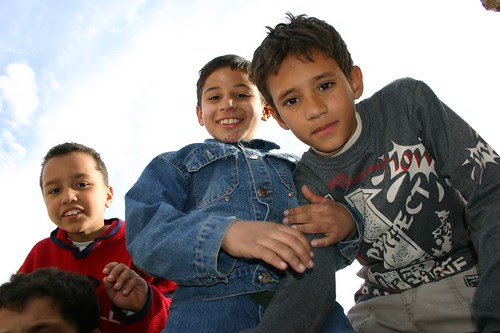 Egypt by agoork
B. Under Mubarak, Life expectancy in Egypt was 70.1 years, the same as in many parts of the USA.
Unemployment in Egypt was LOWER than in the USA.
aangirfan: PRO-MUBARAK

Egypt's President Morsi, who worked at NASA on the development of US space shuttle engines. Only American citizens can work at NASA. Morsi's children are American citizens. (The US /Egyptian Chronicles!) Morsi may be brainwashed - Morsi Meltdown
Some figures for Egypt under Mubarak:

The people of Houla were murdered because they would not join the fight against Assad. WITNESSES TO HOULA
C. David Lesch, a professor from Texas, wrote of Syria's Assad in his 2005 book The New Lion of Damascus:
Assad is a man "with whom we should be engaged, someone whom we should be helping to make sure Syria does not implode.

"He is really the only one in Syria who could achieve this. … Bashar is, indeed, the hope - and the promise of a better future."

There are problems in Syria, but they are caused by outsiders.

Causes Of Unrest In Syria by Kathy Podgers at shoe08

David Paul Goldman, who is Jewish, writes in Asia Times that Syria and Egypt can't be fixed

1. Goldman says: "Syria and Egypt are dying because they chose not to do what China did: move the better part of a billion people from rural backwardness to a modern urban economy within a generation."

2. Goldman then appears to contradict himself when he writes that Assad's Syria has attempted to modernize its agricultural sector, resulting in thousands of farmers moving to the cities.

How Israel wants to see Egypt.

3. Goldman admits that Egypt has now changed for the worse.

"As malnutrition afflicts roughly a quarter of Egyptians ... Egypt is slowly dying.

"Emergency loans from Qatar and Libya slowed the national necrosis but did not stop it."

Goldman writes: "The only humane thing to do is to partition Syria on the Yugoslav model, but that does not appear to be on the agenda of any government."

Gideon Rachman, who is Jewish, is the Financial Times chief foreign affairs commentator, and he has attended meetings of Bilderberg.

Gideon Rachman writes that those who are urging the US to get more deeply involved in the Syrian conflict now are living in the past.

The west's dominance of the Middle East is ending

Gideon Rachman gives 4 REASONS why America will not continue to dominate the politics of the Middle East:

1. The wars in Afghanistan and Iraq have been failures, in so far as they have not turned these countries into peaceful and prosperous American allies.

Rachman suggests that Obama is still sceptical about turning Syria into an American ally.

What Rachman fails to tell us is that Israel is very happy that Afghanistan and Iraq are weak and divided.

Morocco may escape, 'because it is run by a Jew'.


2. The current Great Recession has meant cuts in the Pentagon budget.

The direct and indirect cost of the Iraq war is estimated at $3 trillion.

The US government is borrowing 40 cents of every dollar that it spends.

3. The Arab Spring - Rachman claims that "Mubarak could not have been propped up without risking a Syria-style bloodbath...

"Many of the forces at work in the region - such as Islamism and Sunni-Shia sectarianism - are alarming to the west but they cannot be forever channelled or suppressed."

Rachman fails to tell us that the Arab Spring, Islamism and the stirring up of sectarianism are all the work of -  the CIA-Mossad-NATO and MI6.

4.  The shale revolution in the US lessens American dependence on Middle Eastern oil.

Accepting that western domination of the Middle East is coming to an end, however, should not be confused with saying that western nations will not defend their interests.

So, who is going to be the big power in the Middle East?

Israel - the new big power in the Middle East?

In 1996, the Salafi-Wahhabi group Al-Gama'a al-Islamiyya carried out a shooting rampage at the Europa Hotel in Cairo, killing 18 Greek tourists.

In 1997, the Salafi-Wahhabi group Al-Gama'a al-Islamiyya carried out a terrorist attack near Luxor, in Egypt, killed 58 tourists and four Egyptians.

Ayman al Zawahiri, the head of al Qaeda, was involved in the Luxor massacre.

Al-Gama'a al-Islamiyya is linked to al Qaeda, which is run by the CIA-Mossad-NATO-MI6

The Salafi-Wahhabi sect, who are now so important in the Middle East, were built up by the British in Saudi Arabia to help them wreck the Ottoman (Turkish) empire.

In other words, the Salafi-Wahhabis are tools of the West.

The Moslem Brotherhood has long been a tool of MI6 and the CIA.

Israel and its allies want a Middle East that is weak and divided.

President Morsi has just appointed Adel Asaad al-Khayyat to be governor of Luxor.

Adel Asaad al-Khayyat comes from the political arm of Gamaa al-Islamiyya, the Salafi-Wahhabi group that is said to have carried out the 1997 attack near Luxor.

"Because tourist villages have aspects that anger Allah, including alcohol, gambling and other forbidden things, building these hotels and villages is considered aiding their owners in sin and aggression, and is not permitted," the decision read.

New Governor Is a Shock to Some Inside Egypt

The current boss of al Qaeda is Ayman al Zawahiri.

"You won’t see any difference in the characters of your play until you change the programming that is causing them to act out the scene of your life in front of you so expertly."

The Ego is Sneaky: Five Ways to Know When It’s In Charge