JOKO IS NOT DEAD

Joko is not dead. This is a fake death announcement, circulated on social media, intended to make out, falsely, that Joko is Chinese.

Indonesia is soon to have a new president.

As we predicted, Joko Widodo's PDI-P party is to ally with the moderate Moslem PKB party.

The PDI-P is the party of Megawati, the daughter of former president Sukarno.

The Moslem PKP party is associated with former president Wahid and a pop star. 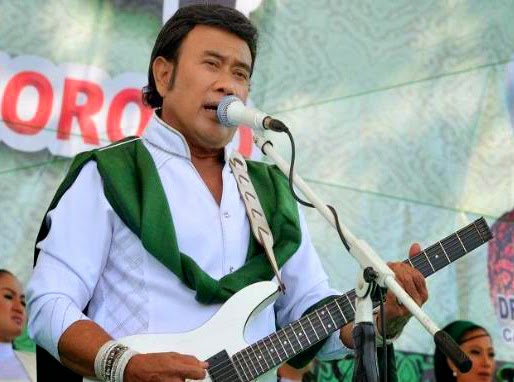 Rhoma Irama of the Moslem PKB. In 2003, neighbours followed by journalists caught both Rhoma Irama and Angel Lelga, an actress, in the latter's apartment at midnight. Rhoma and Angel first stated that they were discussing religion.[7] After several revisions including Rhoma's picking up movie scripts, Angel confirmed that Rhoma had married her on "siri" ground (unregistered at official record but permissible by Islamic Sharia) and later divorced her on the same day.[8]

Gerindra is to ally with the 'less moderate Moslem' PPP party.

Gerindra party officials have been in talks with Golkar, once the parliamentary vehicle of former president Suharto.