Sulaiman Abu Ghaith (above) is married to Fatima, one of Osama bin Laden's daughters.

Abu Graith, a Kuwaiti, has been supporting the CIA-Mossad-MI6 agenda since at least 1990. 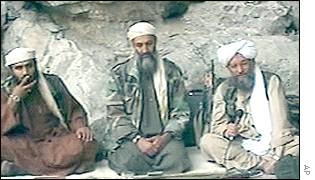 In 1990, Abu Graith's work for the CIA and Mossad included the denouncing of Saddam Hussein.

Abu Ghaith was a founder of Al Wafa al Igatha al Islamia, a charity that the CIA used as a front for al Qaeda's fund-raising efforts.

In July 2003, a Kuwaiti minister announced that Iran was holding Abu Ghaith and that Kuwait had refused an offer from Iran to extradite him to Kuwait.[7]

In other words, the CIA was still protecting Abu Graith.

In late January 2013, Abu Ghaith was detained in Turkey, but then released.

In March 2013, it became clear that the CIA had a new role for Abu Graith.

Abu Graith was arrested in Jordan, handed over to the USA and put on trial as part of a CIA-Mossad propaganda exercise.

In court, Abu Ghaith  described meeting bin Laden inside a cave in Afghanistan hours after the September 11 attacks.

In court, Abu Ghaith quoted bin Laden as then saying  "We are the ones who did this."

Omar bin Laden claims to be one of the sons of Osama bin Laden.

Omar makes it clear that not everything in his memoir is accurate!

Quoting a French intelligence report posted by PBS Frontline, The New Yorker reports, “During the nineteen-eighties, when the Reagan administration secretly arranged for an estimated $34 million to be funneled through Saudi Arabia to the Contras in Nicaragua, [Osama’s eldest brother] Salem bin Laden aided in this cause.” [PBS Frontline, 2001; New Yorker, 11/5/2001]

Did the Pakistan military get too close to a CIA safe house?

Did the Pakistan security services get involved in a fight at the CIA safe house and then discover members of bin Laden's family being housed there?

Did the US military then arrive on the scene to remove the evidence and concoct a story to cover its involvement with al Qaeda?

An ISI official told the BBC the compound in Abbottabad where Bin Laden was allegedly killed had been raided in 2003. (Bunny Laden.)

A Cobra helicopter belonging to the pakistan military

According to Pakistani Urdu TV channel Geo News (killed in Abbotabad near Islamabad of Pakistan):

Pakistani intelligence officials said that a Pakistani army helicopter was shot down in Abbottabad and then a search operation was launched by Pakistani forces.

At about 1:20 a.m. local time a Pakistani helicopter was shot down by unknown people in the Sikandarabad area of Abbottabad.

The Pakistani forces launched a search operation in the nearby area and encountered a group of unknown armed people.

An exchange of fire followed between the two sides.

When the exchange of fire ended, the Pakistani forces arrested some Arab women and children as well some other armed people.

Two U.S. helicopters flew to the site and carried away a dead body

Initial reports said that at least one was killed and two others were injured in the crash.

At least two houses were engulfed by the huge fire caused by the crashed chopper.

Osama bin Laden in the American hospital in Dubai
~~

"U.S. officials have said that Pakistani officials were not told about the early morning helicopter raid until the strike team had killed Bin Laden and had returned to Afghanistan from where they took off, citing security reasons.

"Many Pakistanis were surprised at how this was possible, especially when initial reports stated that the choppers took off from a Pakistani air base." (Bunny Laden.)

"I used to go to their house. He had two wives, one spoke Arabic, and the other one spoke Urdu. They had three children, a girl and two boys. They gave me two rabbits."

U.S. officials have listed a number of points that they claim prove the dead man is Osama bin Laden:

DNA taken from 'the brain of Osama bin Laden's sister following her death from brain cancer' was a 99.9 per cent match to that of Osama.

A woman, 'believed to be one of bin Laden's wives', confirmed bin Laden was the dead man.

The CIA said they compared photos of bin Laden's body with known photos of him and were 95 per cent sure that they showed the same man.

The burial from an aircraft carrier in the North Arabian Sea was videotaped aboard the ship, according to a senior defence official.

A Pakistani police officer says the mansion was owned by an Afghan national called Arshad Khan.

He added: "There were several members of the bin Laden family inside the compound who have been taken into custody.

"One of them was his daughter Safia." (Osama bin Laden: Neighbours shocked to be living next to world's ...)

"Unidentified males who survived were flown from the scene, while four children and two women, including Bin Laden’s daughter Safia, were taken away in an ambulance.

"It is believed his youngest wife Amal al-Sadah was also taken into custody."

Osama "was hiding in Abbottabad with one of his wives, a son and a daughter...

"His 10-year-old daughter Safia watched American commandos entering the house, who took away the dead body of her father.

"She confirmed later: 'The Americans dragged the dead body of my father through the stairs'."

A scene from the film Blackhawkdown

"His youngest wife, Amal al-Sadeh, 27, with whom he reportedly had a number of children, was shot in the leg during yesterday's attack.

"The al Qaeda chief's beloved youngest son, Hamza, 18, and another son, 22-year-old Khalid, were also said to have been killed."

(The loyal sons of Osama Bin Laden - and the many relatives who ...)

"When the White House released a transcript of Brennan's briefing, it substituted the name of a different son, Hamza...

"Carney said Tuesday that the wife hadn't died and was merely shot in the leg, although another woman did die. But it wasn't clear that either of them was trying to shield bin Laden.

WILL THE 9 11 PERPETRATORS FALL OUT?