John Alan alerted us to the following:

Reportedly, The Huffington Post has not had much to say recently on the story of the Hollywood director Bryan Singer.

He was educated at a military academy.

He is old Texas oil money.

Michael Huffington is a Hollywood producer.

Gary and Edmund Entin are the twins who live with Bryan Singer.

There is no suggestion that Michael Huffington has been involved in anything improper.

Democratic Republic of Congo. There is no suggestion that any of the people in the photos have been involved in anything improper.

Allegedly, some of the celebrities who go off to Africa are sometimes supplied with child prostitutes.

A poster at LipstickAlley wrote:

"My friend works for a luxury concierge company that does travel services for rich American diplomats, celebrities, etc.

"Mostly from Van Nuys and Boro (Hollywood area) to wherever they need to be in Africa for special events and planned engagements.

"Not always, but a lot of these these trips are cover ups.

"White people can just mumble the words Darfur and nobody would think twice that they're in actuality contributing to child prostitution, and yes, they're actually billed for it in their concierge package.

"The clients will state whether they want a travel companion or private encounter, what sex, and the preferred age.

"I don't know HOW but it's the luxury hotels who work with them in facilitating that the meetings take place.

"The hotel manager gets a percentage of a fee for acting like a discreet brothel and whatever's left is given to the child/teenager prostitute.

"These celebrities are literally happy to do it. In their mind they think they're helping getting a kid out of poverty or helping them go to school. 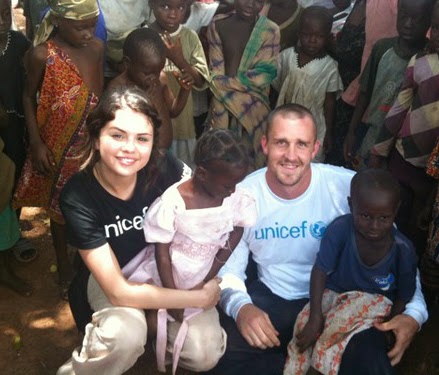 "Celebrities and faux 'ambassadors' make the concierge companies sign airtight non-disclosure agreements that explicitly state they're not allowed to release any information to third parties unless it fulfills requirement of their services, but it shouldn't be too hard to guess. Just think of the people who always seem to be in Africa worried about the 'youth'".

Salva’s lawyer, acknowledging his client’s "inappropriate relationship with a young boy," plea-bargained 11 felonies down to five.

"I grew up in Los Angeles. These parties have been going on since time began.

"I know for fact that Reverend James Cleveland used to throw such parties at his mansion in Baldwin Hills.

"A number of the boys who attended are now household names."

Cleveland contracted AIDS through homosexual liaisons, and died of AIDS.[7][8][9]

"Bryan singer is just the scapegoat for the higher ups who are behind the parties...

"Boys were being told they would be in movies, TV shows, ad campaigns etc, and were (allegedly) drugged and raped.

Meanwhile, in the UK, the cover-up continues.

Lord Janner, a Labour Member of parliament for 27 years

The UK's notorious Crown Prosecution Service (CPS) "is considering evidence against Lord Janner as part of an inquiry into allegations of historical child abuse."

Police have said he has not been arrested.

The BBC understands he has not even been interviewed.

The investigation is linked to Frank Beck, who was found guilty of abusing children in the 1970s and 1980s.

Beck, who was convicted of sexually and physically abusing more than 100 children, ran children's homes in Leicestershire.

He died in jail.

Lord Janner is a former president of the Board of Deputies of British Jews.

He is also chairman of the Holocaust Education Trust.

Lord Greville Janner has been a friend of Michael Jackson and of Yuri Geller.

On 20 December 2013, we learn that Lord Greville Janner's home has been searched by the UK police as part of child sex investigations.

Janner has been in trouble before.

Janner was at home on 19 December 2013 but refused to come to the door.

A young man, called 'Jameson', claimed he was the peer's personal spiritual healer. He said: "The Lord won't come to the door."

Janner is a member of the Magic Circle and the International Brotherhood of Magicians.

Janner is linked to the late Frank Beck who served 5 life sentences for child abuse.

Frank Beck was implicated in the abuse of boys in Leicestershire care homes.

Frank Beck claims he was imprisoned because he had exposed alleged abuse by a certain high-profile politician.

Reportedly, at his trial, Beck stated that: "One child has been buggered and abused for two solid years by Greville Janner".

Paul Winston, who was thirteen when he and Janner first met, was able to describe Janner's home, the rooms they had shared, and Janner's habits and person in detail.

Janner and Jackson and Geller.

Frank Beck died suddenly just before his appeal was due to begin.

One was killed in a road accident, and the other 'has been subjected to police harassment'.

The US military in the Philippines
Posted by Anon at 17:00