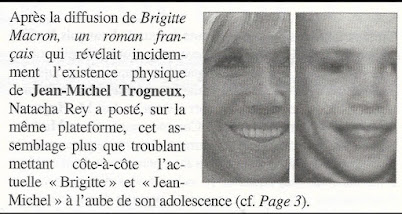 'According to this fake news ... published in the far-right review Faits & Documents ... Brigitte Macron is actually … her brother.

'To support her claims, Natacha Rey ... asserts that Brigitte Macron's brother is "untraceable".' 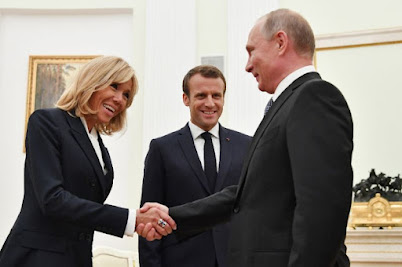 Unknown comments -
'Emmanuel Macron's older wife Brigitte is 100% confirmed to be a trans male, who was originally named Jean-Michel Trogneux ... '
The above claim has been published by freelance journalist Natacha Rey with a 58-page French dossier of evidence
That can be freely downloaded here, a zip file containing 5 pdf's
https://www.mediafire.com/file/sxxh586m8wr0fsg/F%2526D-dossier-brigitte.zip/file 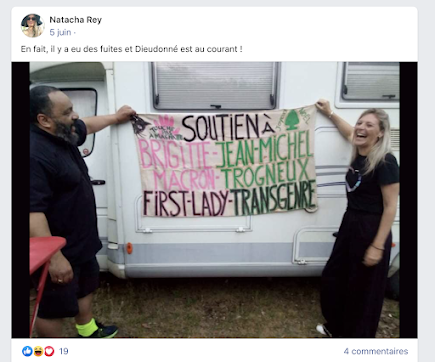 Ms Rey says in her 3 years of research she learned that: -
Young Mr Trogneux 'disappears' after an early life - Brigitte Macron seems to have no youth record - Her children seem to have another mother
Photo of the two faces, Brigitte and Jean-Michel https://i.4pcdn.org/pol/1639589739535.jpg
Note how 'male' Brigitte Macron appears in many photos, such as here, with male characteristics such as broad shoulders, longer arms, skin more like an older male than an older female ... Brigitte usually wearing a wig 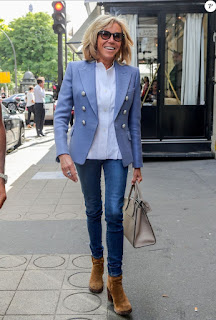 https://i.4pcdn.org/pol/1639602332636.jpg
Here is a short video of younger 'Brigitte' ... also looking quite male
https://twitter.com/PMacgoohan/status/1471087171838820358
Brigitte is the one who introduced Macron to Rothschild, the bank where he started his career. She is the one who introduced him to Jacques Attali, the elite Jew advising French presidents, who then introduced him to previous president François Hollande who, in turn, appointed Macron as Minister of Finances.
It is suggested Brigitte herself is actually Emmanuel Macron's 'controller'
Posted by Anon at 23:47