Donald Trump's anti-China talk 'has pushed the old foes of China and Japan together.'

Donald Trump's policies have led to the strengthening of China's naval collaboration with its once wary Southeast Asian neighbours.

'In a little-noticed move, America's most reliable ally in Southeast Asia, Singapore, co-hosted the first ever joint naval exercise between China and the 10 countries of the Association of Southeast Asian Nations (ASEAN).'

Israel is giving China the keys to its largest port 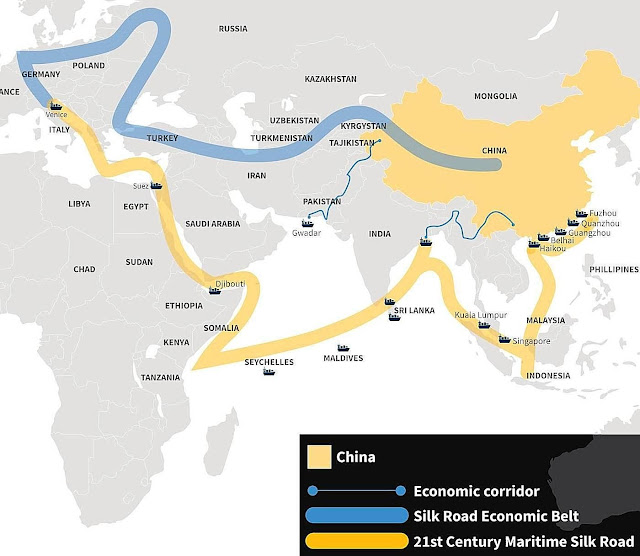 "Within two years China will control the major part of Israel's agro-food industry, its high technology and its international exchanges."

The Silk Road and Israël - by Thierry Meyssan

"By massively exporting its production, China will take over the commercial place that... the United States has occupied...

"Already in 2013, the Pentagon published the Wright plan, which programmed the creation of a new state straddling Iraq and Syria in order to cut the Silk Road between Baghdad and Damascus.

"This mission was carried out by ISIS -

"China therefore modified the layout of its route... deciding to build the route through Egypt, and invested in the doubling of the Suez Canal and the creation of a vast industrial zone 120 kilometres from Cairo [2].

"Similarly, the Pentagon organised a 'colour revolution' in Ukraine in order to cut the European route.

"The pentagon stirred up trouble in Nicaragua in order to prevent the construction of a new canal linking the Pacific and Atlantic Oceans...

"It also constructed in Saudi Arabia the gigantic oil complex of Yasref-Yanbu for 10 billion dollars.

"The links between Israel and China date from the time of Israëli Prime Minister Ehud Olmert, whose parents had fled the Nazis in order to settle in Shanghai...

"China has been negotiating a free-trade treaty with Israel since 2016.

"In this context, the Shanghai International Port Group has bought the concession for the exploitation of the ports of Haïfa and Ashdod, so that by 2021,China will control 90 % of Israëli commercial exchanges.

"Bright Food has already acquired 56 % of the Tnuva kibbutzim cooperative, and could increase its participation, so that China would control most of the Israëli agricultural market.

"The founder of the on-line store Ali Baba, Jack Ma, who came to Tel-Aviv as part of the official Chinese delegation, did not hide his intention to buy up a number of Israeli start-ups in order to recuperate their high technology.

"There is a question of whether or not Washington had authorised the rapprochement between Tel-Aviv and Beijing..."

The Silk Road and Israël - by Thierry Meyssan
Posted by Anon at 01:20