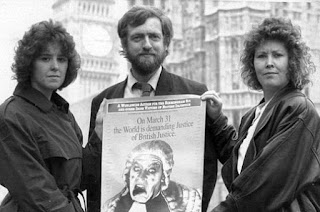 Jeremy Corbyn, in 1990, campaigning against the false imprisonment of six 'patsies'.

In 1974, 21 people died when blasts ripped through two pubs in Birmingham in the UK.

It is believed that this was a false flag attack.

Reportedly, 'the police had a mole in the IRA gang blamed for the attack'.

A court has heard that "there is reason to believe the police had sufficient time, between the telephone warnings and the first bomb going off, to evacuate."

IRA mole may have tipped off police about 1974 Birmingham pub bombings.

The security services allegedly carried out the 1974 'false flag attack' on two pubs in Birmingham, in the UK.

Six innocent patsies were tortured and then spent many years in jail for a crime they did not commit.

The purpose of the bombings was:

(1) To discredit the Irish Republicans.

(2) To give the UK government the excuse to introduce the Prevention of Terrorism Act.

Roy Jenkins, the gay British Home Secretary of the time, is believed to have been an agent of the security services.

Roy Jenkins was an acquaintance of Victor Rothschild and of the child abuser Anthony Blunt.


At the time of the Birmingham pub bombing the IRA was being controlled by MI5 and MI6.

All the top IRA men worked for the UK security services.


The UK security services used 'child sexual abuse' as a way of controlling the IRA.

IRA 'terror' was used by the UK government to discredit the Irish Catholics.

Hugh Callaghan was one of the innocent men who were tortured and then jailed after the Birmingham pub bombings..

Hugh 'was dragged from his family and had a false confession beaten out of him.'

Hugh says: "On the day of the bombing, it was my wife's birthday.

"I'd gone around to see Richard McIlkenny (one of the other Six) to pay back £1...

"I’m not a republican; I wasn't interested in politics...

"The next day ... when I got home the police were waiting and my wife and daughter were in a right state."

Hugh was taken to a police station and "slapped about a bit".

He said: "They got out a gun and told me to say what happened.

"Every time I said something they didn't like they would pull the trigger and it would click and I thought I was going to be shot.

"I was terrified and signed what they wanted me to, thinking the solicitor I was promised would sort it later.

"I got remanded and the prison officers let the inmates beat us up.

"We were sent to the bathroom afterwards to clean ourselves.

"I was last and by then the bath was full of blood – it was awful."

HUMMINGBIRD HITS YOUR BLOG.
Posted by Anon at 21:07