The weird world of the Delevingne sisters: 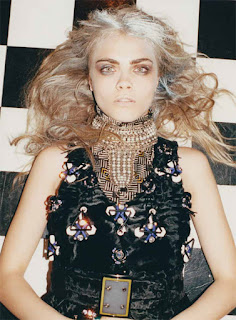 Nicholas Coleridge is a top executive with Conde Nast which publishes Tatler.

Tatler was edited by Ghislaine Maxwell's friend Geordie Greig from 1999-2009, so it would seem that Mr Greig and Mr Coleridge were colleagues.

Nicholas Coleridge may or not also be Chloe Delevingne's godfather, as well as Cara's.

Nicholas Coleridge is friends with Ghislaine Maxwell (he thanks her in one of his books).

Nicholas Coleridge and his wife are in Ghislaine Maxwell's 'Black Book'.

At least one of the Delevingne sisters - Cara - appears to be mind-controlled.

I wonder what Nicholas Coleridge, Ghislaine Maxwell, and the rest of the Stowe VIP Set might know about it...

"The articles from Condé Nast promoting prostitution as a career, directed at teens, was the giveaway that the publisher is invested in child sex trafficking."

Longsand @Longsand17
'Lord Hogan-Howe has joined the board of advisers for Carbyne, a company run by former Israeli intelligence staff which was set up by Ehud Barak, former prime minister of Israel, and financed by the paedophile Jeffrey Epstein.' #TheMet #VIPaedophiles …
Show this thread
...

As of today, I am the only winner of the 12 December Election 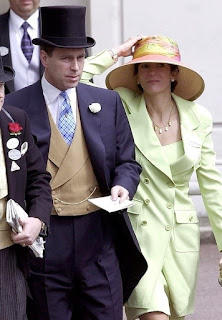 The following is according to Dr Katherine Horton, who aired the ideas below TWO YEARS AGO in a YouTube broadcast ('Techno Crime Fighters Forum #18').

According to Dr Horton:

Wealthy, 'rank-and-file' criminals with whom the hierarchy of the global crime cartel wish to communicate are drawn to ROYAL ASCOT and other events like it.

ROYAL ASCOT "is one of the MAJOR MONEY LAUNDERING EVENTS in the UK calendar ...

"If you want to launder money, you put it on a bet -- and you know which horse is going to win because you bought everybody off -- and then you get it back with an extra kick-back."

(Dr Horton notes, too, that race 'winnings' are not taxed).

The crime cartel hierarchy used the 2016 and 2017 Royal Ascot TV commercials to communicate a message to its wealthy criminal 'rank-and-file', Dr Horton has said.

The 'rank-and-file' wealthy criminals are all freemasons (as are the cartel hierarchy, of course); they are experts at spotting and understanding masonic symbolism.

The message the hierarchy communicated to its 'rank-and-file' criminals via the 2016 and 2017 Royal Ascot TV commercials is that finally, "after 300 years" -- and having already asset-stripped countries and institutions throughout this period (a process still ongoing) -- THE CARTEL IS POISED TO COMMENCE ASSET-STRIPPING THE BRITISH ROYAL FAMILY ITSELF.

The royal family who themselves are *part of* the cartel and *aware* of what is planned for them...

Yet who are insufficiently powerful or high-up to prevent the asset-stripping of their holdings that is now poised to commence.

Explaining WHY the cartel is about to turn on the British royal family -- eating its own tail, if you will -- Dr Horton suggests it may be because the number of other, comparably valuable and accessible, entities to asset-strip is dwindling.

Finally, Dr Horton suggests that the cartel hierarchy uses TV commercials, music videos, and other popular culture artifacts to communicate its criminal plans not only because it is an effective way to communicate with 'rank-and-file' criminal elites 'in their own language' (masonic symbolism) -- but partly also to show off.

What do your readers think, Aang?

At least 135,000 children in Britain to be homeless at Christmas

"Then there is the photograph, taken at ROYAL ASCOT in June 2000, years before most people had ever heard of Jeffrey Epstein. But there he was with Ghislaine Maxwell in the Royal Enclosure ...

"The Ascot picture tells us that his friendship with Epstein was, if you like, hiding in plain sight."

I'm not sure how significant the 'new' Royal Ascot photographs are, but the location is certainly an interesting - some might say symbolic - one.

This is particularly the case if the 'new' pictures spark further legal actions against the Duke, and mark the start of a chain of events culminating in the enforced 'downsizing' of the royal family.

Are the royal family about to be asset stripped -- to benefit only elite criminals -- as their number is reduced?


Trump proposes tariffs up to 100% on $2.4B of French imports to retaliate for digital tax

WE ARE BEING TREATED TO AN UNFOLDING *DAMAGE LIMITATION EXERCISE* BY THE SPOOKY ANGLO-US MEDIA ESTABLISHMENT?

Judging by the comment piece above, published by the New York Post, it seems that even its owner, RUPERT MURDOCH (who is in Ghislaine Maxwell's Black Book) has reluctantly concluded -- just like the spooky BBC, one of whose star broadcasters, Andrew Neil, also appears in Ghislaine's Black Book -- to sacrifice Prince Andrew in the name of DAMAGE LIMITATION.

Cut out the visible cancer, and pray that the rest of the cancer lying beneath the surface won't attract the public's attention.

Because there are so many OTHER individuals who have serious questions to answer about the Maxwell-Epstein affair, besides the most visible ringleaders.

Some of whom even (believe it or not) work in the UK media!

I know, I know. So difficult to believe, right?

Isn't that right... (ALL THE OTHER NAMES IN GHISLAINE'S BLACK BOOK)?

It's your turns next.

Print THAT in your filthy rags.