At the age of nine, Louise 'was molested' by a house painter, who 'had lured' Louise to his home.

From the age of fourteen, Louise  was a heavy drinker and 'wildly' promiscuous.

In 1922, 15-year-old Louise Brooks, and her middle-aged chaperone Alice Mills, travelled from  Kansas to New York.

Louise had won the chance to study with a top dance troupe.

Louise and Alice Mills 'shared a lumpy bed each night in their modest rented apartment.'

The creator of Downton makes a movie about Louise Brooks ...

At 17, Louise was a chorus girl in a Broadway show famous for nudity. 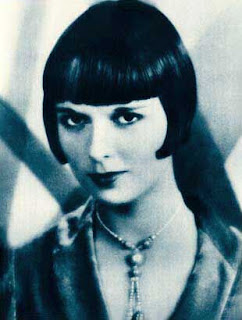 Louise, and some of her fellow showgirls, slept with top people, from New York, London and Paris.

She reported: 'There was a hand-picked group of beautiful girls who were invited to entertain the great men in finance and government.'

If they slept with top people, they were rewarded with 'money, jewels, mink coats, a film job - name it.'

One of these top people was  newspaper tycoon Lord Beaverbrook.

At the age of 18, Louise had a five-year contract with Paramount Studios.

Louise had a two-month affair with Charlie Chaplin.

Louise later claimed she and Fears had been lesbian lovers.

Louise made films in Hollywood.

At the age of 19, Louise married British-born playboy and director Eddie Sutherland.

In 1928, less than two years after their wedding, she divorced Sutherland after falling 'terribly in love' with Marshall.

Louise said that women had pursued her since she was 15.

She claimed she had one night of passion with Greta Garbo, when they were both in their early 20s.

In 1928, Louise moved to Berlin, to enjoy Berlin's debauchery and make some films.

In Pandora's Box, she played Lulu, a sexually uninhibited showgirl whose behaviour leads to prostitution and ruin.

When Louise refused, Cohn ensured that Louise only got B-movie roles. 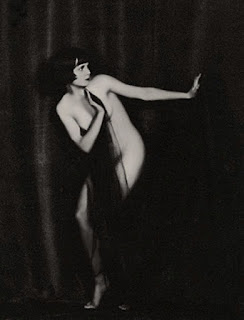 One of Louise's numerous one-night stands was with Humphry Bogart.

In 1938, Louise got a job as a salesgirl in a department store in New York.

She converted to Catholicism and died of a heart attack, aged 78.

The creator of Downton makes a movie about Louise Brooks ...
Posted by Anon at 22:19