Democrat Jay Inslee, the governor of the state of Washington.

Jay Inslee was "one of Congress's most ardent advocates of strong action to combat global warming," according to The New York Times.[28] 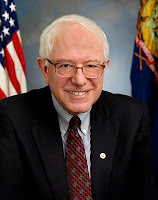 In 1974, Sanders sent an open letter to President Gerald Ford, warning of a "virtual Rockefeller family dictatorship over the nation" if Nelson Rockefeller was named vice president.

Sanders called for the CIA to be disbanded, in the wake of revelations about the agency's misdeeds.

Sanders voted for the 2001 Authorization for Use of Military Force Against Terrorists[111] that has been cited as the legal justification for controversial military actions since 9 11.[112]

In 2008, Sanders was a co-sponsor of a Senate Resolution, "recognizing the 60th anniversary of the founding of the modern State of Israel and reaffirming the bonds of close friendship and cooperation between the United States and Israel."

The resolution reaffirmed Israel's right to defend itself against terror. It also congratulated Israel on building a strong nation and wished for a successful Israeli future.[130] 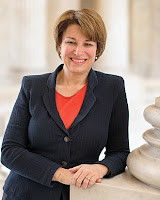 Amy Klobuchar is the daughter of Rose (née Heuberger) and Jim Klobuchar.

In February 2019 Buzzfeed News reported that Klobuchar's Congressional office was "controlled by fear, anger, and shame".[38]

Interviews with former staffers indicated that Klobuchar frequently abuses and humiliates her employees, with as much time spent on managing her rage as on business.[38]

"Klobuchar tells how in a meeting with Benjamin Netanyahu, the Israeli prime minister lavished more attention on her than her colleague from New York, Kirsten Gillibrand."

"Klobuchar voted to approve a law that would consolidate $38 billion in defense assistance for Israel while protecting states that penalize businesses that boycott Israel." 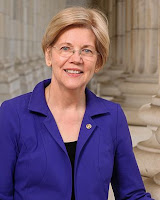 She has proposed an “ultra-millionaire tax” on people worth more than $50 million and a major overhaul of housing policies.

Warren supports a secure and democratic state of Israel and wants to ensure the security of Israel from external forces such as Iran, Hezbollah, Hamas, and others.

Warren states she supports a two state solution, but she believes Palestinian application for membership in the UN isn't helpful.[60] 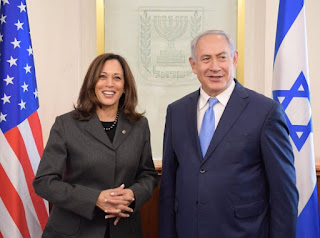 Kamala Harris and her boss.

Harris was a co-sponsor of a Senate resolution expressing objection to the UN Security Council Resolution 2334, which condemned Israeli settlement building in the occupied Palestinian territories as a violation of international law.[191][192][190]

At the AIPAC conference, Harris said that "the first resolution I co-sponsored as a United States senator was to combat anti-Israel bias at the United Nations".[191]

She also supported Senate resolution celebrating the 50th anniversary of the reunification of Jerusalem.[193][194] In late 2017, Harris traveled to Israel, where she met with Israeli Prime Minister Benjamin Netanyahu.[191] 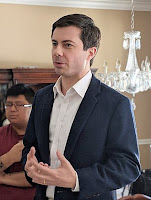 Peter Buttigieg was a Rhodes Scholar.

Peter Buttigieg is openly gay and is married to Chasten Glezman.