Hassan Diab explains that the 'chemical attack', on 7 April 2018, in Douma in Syria, was fake.

Hassan Diab says that he and his mother heard loud voices on the street, urging everyone to rush to the hospitals.

When Hassan entered the hospital, unknown people grabbed him, poured water on him and then put him with other patients.

"We were in the basement.

"Mom told me that today we don't have anything to eat and that we will eat tomorrow.

"We heard a cry outside, calling 'go to the hospital.'

"We ran to the hospital and as soon as I entered, they grabbed me and started pouring water on me," 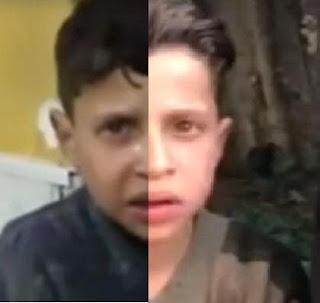 The boy in the 'chemical attack' video is Hassan Diab.

His father continued the story.

He was at his work when he heard that his son was in hospital.

He rushed to the hospital and found his family there in good health.

He added that he was on the street, smoking and didn't feel any chemical weapon.

According to him, it turned out that militants gave all the participants food - dates, cookies and rice - and then released them.

"There were no chemical weapons. I smoked outside and felt nothing.

"I entered the hospital and saw my family.

"Militants gave them dates, cookies and rice for participating in this film and released everyone to their homes," Hassan's father said.