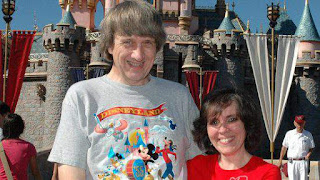 The Turpins at Disneyworld.

The Turpin case is puzzling.

There was another puzzling case in the same part of California.

In Los Angeles, in California, a boy called Walter Collins was kidnapped.

He was one of a number of boys who went missing in the Los Angeles area around the same time.

Walter's father was in prison.

The police suggested that Walter had run away and would probably return, eventually.

Reports said he had been found working in a restaurant, or, on a farm.

The boy denied being Walter, but following "gentle" questioning, he declared that he was, in fact, Walter.

(The Wineville Chicken Coop Murders -The Real Story behind.)

He was then given to the Los Angeles police.

Walter's mother, Christine Collins, claimed that the boy was not Walter.

She was told by the officer in charge of the case, police Captain J.J. Jones, to take the boy home to "try him out for a couple of weeks."

Christine Collins showed the police dental records to prove the boy was not Walter.

Captain Jones had Christine Collins committed to a psychiatric hospital.

The boy then told the police that he was in fact 12-year-old Arthur Hutchins, a runaway from Illinois, but originally from Iowa.

Nobody reminded us of the story of Walter Collins and Clint Eastwood's film Changeling which is about the Collins mystery.

'Swallowing the Camel' tells us more of 'The Real Stories Behind The Changeling'.

"This nearly-forgotten story of abuse of power, family dysfunction, and deception remains deeply revelent today, in a time when unlawful detainment, official malfeasance, and extralegal measures like 'extraordinary rendition' are common...

"At this time the Los Angeles Police Department was rife with corruption.

"A 'gun squad' practiced its own strange brand of urban Western justice under the leadership of Police Chief James 'Two Guns' Davis, mowing down suspected criminals and inconvenient persons alikeunder the force's shoot to kill policy; bodies were routinely found in alleys, warehouses, and other dark corners of the city.

"The Los Angeles Police Department also had its fingers in an array of criminal enterprises (bootlegging, prostitution, extortion, bribery), and was frantically trying to cleanse its image as public outcry against the corruption grew louder and more strident every day."

Jaycee Lee Dugard, who was kidnapped in 1991, in California.

Could the authorities have been protecting the kidnappers?

Paul A. Bonacci, as a child, was kidnapped, tortured and subjected to sex abuse and mind control.

These children were then abused by top people.

According to the article entitled 'Wineville Chicken Murders':

"Canadian born in 1908, Gordon Northcott would later claim that his father sodomized him at age ten.

"The old man finished his life in a lunatic asylum, and one of Gordon Northcott's paternal uncles died years later, in San Quentin, while serving a life term for murder.

"A homosexual sadist in the mold of Dean Corll and John Gacy, by age 21, Gordon Northcott was living on a poultry ranch near Riverside, California, sharing quarters with his mother and a 15-year-old nephew, Sanford Clark.

"For years, Gordon Northcott mixed business with pleasure in Riverside, abducting boys and hiding them out on his ranch, renting his victims to wealthy Southern California pedophiles."

NATO soldiers torturing a boy Website for this image

Plenty of people, including the police, knew all about Gordon Northcott.

According to 'Swallowing the Camel: The Real Stories Behind The Changeling' :

"At least twice a week, Gordon Northcott would rape his nephew. He flew into rages without provocation, beating the boy frequently.

"He also brought about a dozen young boys to the ranch to be sexually assaulted. He released them with threats to find and kill them if they told anyone.

"He had tried to molest his mechanic's teen son on several occasions.

"In August of 1927 a father caught Gordon Northcott trying to lure his son from Pickering Park, and chased him away with a knife.

"Two years before that, he had been arrested for inappropriate behaviour toward a friend's little brother."

In 1928, young boys were reported kidnapped and murdered in Los Angeles and Riverside County, California.

In 1926, Gordon Northcott, and his parents, moved from Canada to Wineville in California, where he started a chicken ranch.

Gordon Northcott took with him his 13-year-old nephew, Sandford Clark.

Once in California, Northcott beat and sexually abused Sandford Clark.

Sanford told Jessie about murders that had taken place at Wineville.

Once back in Canada, Jessie informed the American consul in Canada about the murders in Wineville.

The American consul wrote to the Los Angeles Police Department.

Reportedly the US military kidnaps young boys. Website for this image

The Northcotts managed to flee, but were later captured.

Sanford testified that Gordon Northcott had been aided in all this by Northcott's mother, Sarah Louise Northcott, and by Sanford himself.

Gordon Northcott was sentenced to death and his mother was sent to prison.

It was concluded that 'Walter Collins aged 12, the Winslow brothers aged 12 and ten, and a Mexican youth' had all been murdered.

It was speculated that Gordon Northcott may have killed as many as 20 people.

Northcott kidnapped an undetermined number of boys and molested them at the chicken ranch.

Usually, after molesting the children, Northcott would let them go, after having made various threats.

There was a rumour that Northcott had "rented" his victims to wealthy southern Californian pedophiles.

He seemed unable to remember such details as Walter's clothing and the colour of his eyes.

Collins continued to hope that her son was still alive.

There was a boy who, along with his parents, spoke to the authorities five years after the execution of Gordon Northcott.

The authorities had initially speculated that this same boy had been a murder victim at Wineville.

In fact, Northcott had taken the boy to Wineville, molested him, and then returned him to Los Angeles County.

Some 'body parts' were found in the area.

Christine Collins continued to search for Walter for the rest of her life.

He had just escaped from the chicken farm of his grandparents, Cyrus and Louise Northcott.

(Other papers report that immigration officers had located Clark at the farm following inquiries as to his presence in the US).

He stated he had travelled to the farm from Canada with his uncle, Gordon Stewart Northcott. Gordon had "misused" him, and held him captive. During his time there, he was forced to witness and participate in the torture and murder of four boys. One of the boys, he declared, was in fact Walter Collins. Clark stated he was positive the boy was Walter.

Clark told authorities that the murders had begun with a young Mexican boy, who Nothcott had killed with an ax; in fact, the headless corpse of a young Mexican boy had been found along a highway near the town of Puente some few months prior. Next had come the week-long ordeal of Walter, who Northcott had tied to a bed and tortured for a week.

Finally, Sarah Louise, Gordon's mother, killed Walter with an ax. Next came the torture and murders of 12 year-old Lewis and 10 year-old Nelson Winslow. Clark told police he had been forced to kill Nelson while Gordon hacked Lewis to death.

Reportedly there has been a massive police cover-up of child abuse by top people in Jersey in the British Isles. Website for this image

When police arrived at the ranch, only Cyrus was there. Louis and Gordon had fled. They found overwhelming evidence attesting to the truth of Clark's assertions. A bloody cot was located, where the tortures had taken place.

Three empty graves were located, from which the police determined that the bodies had recently been removed. The bodies had been covered in quicklime. Bones, body parts (a hand was reported to have been found) and a hat which the Winslow's father later stated had belonged to one of his sons were located. In one of the chicken coops, a bloody axe was found. It was clotted with hair and "human debris".

A short time later, Sarah Louise and Gordon were located in Canada and returned to California.

Sarah Louise intially confessed to all four murders, most likely in an attempt to save her son. She was convicted of the murder of Walter Collins and sentenced to life in San Quentin State Prison.

It was reported that prior to his trial, Gordon had taken authorities on a trek through the Mojave Desert in search of the boys' remains. During that time, he allegedly stated that he had killed "Walter Collins, Lewie Winslow, Alvin Gothea, a boy named Richard" and another boy whose name he did not know.

Gordon hinted to police that it was possible another four boys had been murdered at the ranch (Woodland Daily Democrat, 12-4-1928.)

A Wikipedia article on the murders states that one of the boys Gordon claimed to kill was in fact found alive and well five years later; this may be the Gothea boy mentioned, though I have yet to confirm this. A UP story, carried in various papers in early January '29, states that Gothea was the Mexican boy; this is the only place I have seen this stated).

The Turpins at Disneyworld.


1 Jun 2014 - Billy Bryars, the son of an oil magnate, ran a 'boy brothel' at the summit of Laurel Canyon. Customers at the boy brothel were said to include J. Edgar Hoover and his 'gay' partner Clyde Tolson. Inside The Laurel Canyon. Godot Paulekas, who was one of many people who died in mysterious circumstances ...


17 Apr 2017 - (Laurel Canyon Part I) The Monkees Michael Nesmith set up Pop Clips which developed into MTV, which is rumoured to be linked to the CIA. According to Alex Constantine: There have been Congressional testimonies from CIA operatives who admitted... that they have "driven some of these musicians to ...


21 Sep 2015 - Just a few miles away from where Elliot Rodger lived is Laurel Canyon, in the Hollywood Hills region of Los Angeles. Laurel Canyon. Billy Bryars, the son of an oil magnate, ran a 'boy brothel' at the summit of Laurel Canyon. Customers at the boy brothel were said to include J. Edgar Hoover and his 'gay' ...


2 Jun 2014 - Child actor Jonathan Brandis (above) died in mysterious circumstances in 2003, at the age of 27. Cory Haim, who died in 2010. Elliot Rodger - mind controlled sex slave? Just a few miles away from where Elliot Rodger lived is Laurel Canyon, in the Hollywood Hills region of Los Angeles. Laurel Canyon.


16 Mar 2016 - Laurel Canyon in California became Dean's home. Laurel Canyon is said to be linked to CIA mind-control activity. Clifton Webb. Dean had affairs with actors Clifton Webb, Bill Bast, and Jack Simmons, as well as producer Rogers Brackett. Dean starred in Nicholas Ray's Rebel without a Cause (1955), the ...


14 Jun 2013 - In the second piece there you'll notice LA's 'Magic Castle' burning down, a thing that happens a lot in Laurel Canyon. Interestingly Mike Rivero was a magician who appeared at the Magic Castle. If you scroll down the bottom of the page here you can see Mike's Magic Castle lobby card. And you can also ...

aangirfan: DAVY JONES AND THE CIA


1 Mar 2012 - The movie reportedly had deep roots in California's Laurel Canyon, and CIA brainwashing. (Laurel Canyon Part I) The Monkees Michael Nesmith set up Pop Clips which developed into MTV, which is rumoured to be linked to the CIA. According to Alex Constantine: There have been Congressional ...


17 Nov 2014 - Laurel Canyon Billy Bryars, the son of an oil magnate, ran a 'boy brothel' at the summit of Laurel Canyon in California. Customers at the boy brothel were said to include J. Edgar Hoover and his 'gay' partner Clyde Tolson. Inside The Laurel Canyon. California is a major site for CIA mind-control experiments.
Posted by Anon at 09:05