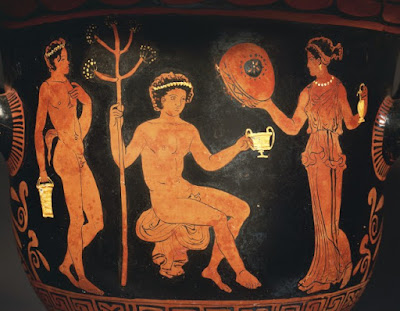 The major secret societies and cults are usually run by elite males who claim to have hidden knowledge, which can only be revealed to 'the chosen'.

This Egyptian cult, which had initiation rituals, believed that Osiris was the God of Resurrection.

Ancient Egyptians believed that the ka, or life-force, left the body at the point of death. 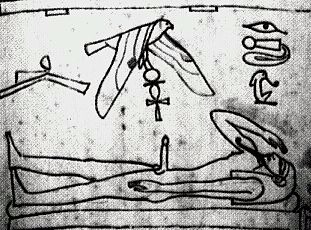 What happened to Osiris?

Isis, Osiris's queen and sister, gathered up the parts of Osiris, to bring him back to life, but could not find his penis since it was thrown into the Nile.

Isis then created a new penis from clay, affixed it to Osiris and breathed life into him to enact his resurrection.

Osiris then became lord of both the upper (earth) and lower worlds.

snippet from Isis and Osiris

There is a cult devoted to Hyacinth. 'Jealous that Hyacinth preferred Apollo, Zephyrus blew Apollo's discus off course to kill Hyacinth. When Hyacinth died, Apollo did not allow Hades to claim the youth; rather, he made a flower, the hyacinth, from his spilled blood.'

People came from all over Greece and beyond to have their questions about the future answered by the Pythia, the priestess of Apollo.

The Greek god Apollo was the patron of Delphi.

Apollo had many male lovers, including Hyacinth.

"It is said of the Pythian priestess, whose oracle seems to have been the most celebrated, that when she sat down a the mouth of the Castalian cave, the prophetic spirit of Apollo entered her private parts.

"She sat with parted thighs on the tripod of Apollo, and the evil spirit entered her from below, passing through her genital organs, and plunged her into a state of frenzy, so that she began with loosened hair to foam and rage like a drunkard." 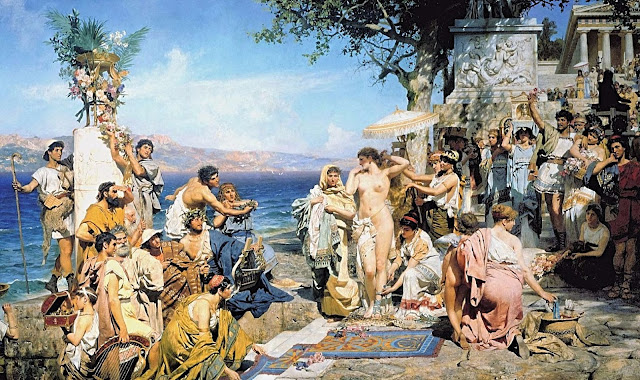 In Ancient Greece, certain people who were 'chosen' could be initiated in to the Eleusinian Mysteries, which referred to an afterlife.

These mysteries are linked to Persephone, who was seized by Hades, the god of death and the underworld.

Zeus allowed Persephone to return to her mother.

"For the initiated, the rebirth of Persephone symbolized the eternity of life which flows from generation to generation, and they believed that they would have a reward in the afterlife."

"During the mid-500s B.C., Peisistratos, a ruler of of Athens, promoted pederasty and the Eleusian Mysteries." 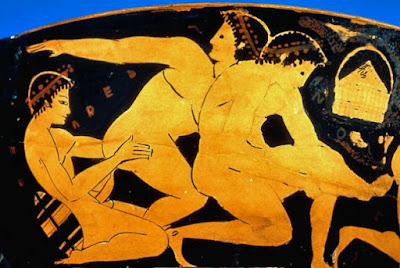 The god Dionysus was androgynous and had his own cult.

"The Dionysian Mysteries were a ritual of ancient Greece and Rome which used intoxicants and other trance-inducing techniques (like dance and music) to remove inhibitions and social constraints, liberating the individual to return to a natural state."

When the wine god Dionysus went to Hades to rescue his mother Semele, the young shepherd Prosymnus guided him to the entrance.

The reward demanded by Prosymnus for this service was the right to make love to Dionysus.

However, when Dionysus returned to earth by a different route, he found that Prosymnus had meanwhile died.

Dionysus kept his promise by carving a piece of fig wood into the shape of a phallus and used it to ritually fulfill his promise to Prosymus, while seated on his tomb.

This, it is said, was given as an explanation of the presence of a fig-wood phallus among the secret objects revealed in the course of the Dionysian Mysteries.

"The Pharisees were obsessed with man-made rules (especially concerning purity).

"Whereas Jesus is more concerned with God's love.

"The Pharisees scorn sinners whereas Jesus seeks them out."

When Jesus healed the man's withered hand, the chief result was that 'the Pharisees went out and conspired against him, how to destroy him.' 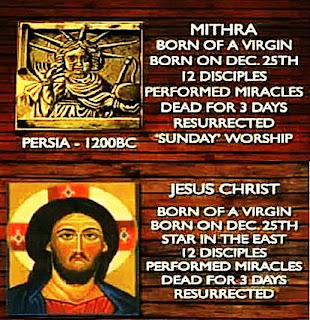 Mithraism was a mystery religion centred around the god Mithras that was practised in the Roman Empire from about the 1st to the 4th century CE.

The religion was inspired by Persian worship of the god Mithra.

The Emperor Constantine was a member of the Mithras cult. 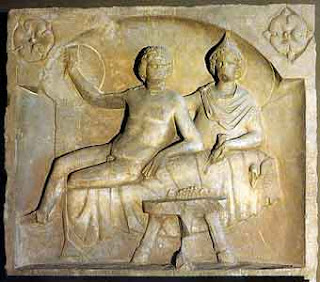 Mithra had a virgin birth on December 25th.

Mithra was laid in a manger.

Mithra was tended by shepherds in the manger.

He had 12 companions (or disciples).

He gave his own life to save the world.

He was dead for three days, then resurrected.

He was called 'the Way, the Truth and the Light.'

He had his own version of a 'Lord’s supper.' 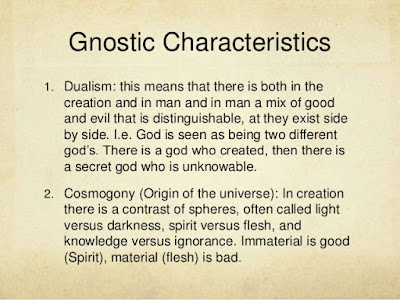 "Gnosis is mystical or esoteric knowledge (knowledge for the small elite) based on direct participation with the divine."

"The love of ones own sex was the core of the Gnostic ethical system."

"The homosexual elitism of many early Gnostic cults has been ignored by modern scholars."